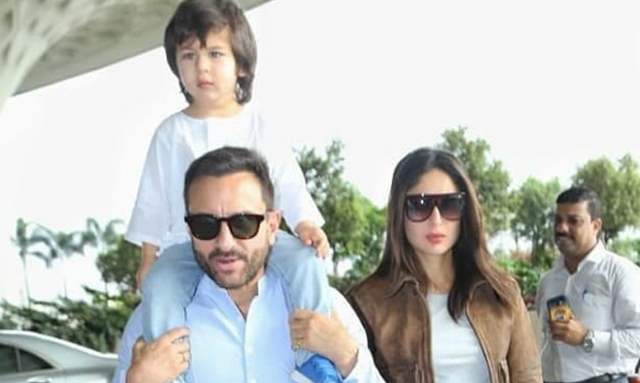 Bollywood actress Kareena Kapoor Khan celebrated her 39th birthday with her close family, last Saturday. The actress who was joined by her hubby Saif Ali Khan, little baby Taimur along with her family at the Pataudi Palace also featured in Romedy Now’s chat show ‘The Love Laugh Live Show’.

During the interaction, Bebo opened up about many things, especially her little munchkin and nation’s current heartthrob Taimur Ali Khan. While talking about her son, Kareena revealed that she and Saif have considered sending Taimur to a boarding school, and reason is quite relatable.

As quoted by Mid-Day, she revealed, “We both are pretty much in for it. The life in Mumbai, the life we have in the movies might push us to the point. Right now, I can't have people trailing him around. It just bothers me when people say, 'oh I look at Taimur's picture and it makes me happy' I find it little weird also because I don't look at other kids' pictures and say it makes me happy. It is just the way I am.”

“It will be great if he can have a normal life, though we are trying as much as we can,” she further added.

In the same interview, Kareena also shared some of Taimur’s cute little antiques. From being a curious kid to pleading his mother to not go to work, the Heroine actor also shared Taimur often accompanies her to work. She also revealed why Taimur calls her 'Amma' and Saif 'Abba', and not 'mom' or 'dad'.

"He can call me whatever he wants. But it's just that Saif and his siblings called their mother (Sharmila Tagore) 'Amma' and their father (Mansoor Ali Khan Pataudi) 'Abba', so it's just like a thing now," she said.

"Is Staying Silent Being a Part of the Problem?": Says Ankur ...
10 minutes ago

Sushant Singh Rajput’s father Smiles Proudly as he says “I ...
11 minutes ago

‘Sushant Could Not Sleep for 4 Nights Waiting For Sanjana to ...
53 minutes ago

Dance on Demand (DoD) – a dance act you shouldn’t miss on ...
an hour ago
View More
TOP