Specials @ 10 is all set to start on Sony from March 2nd. The series will start with Anurag Kashyap's show Rajuben on Monday, where the role of the female lead will be played by the envious hockey team member from Chak De, Bindiya aka Shilpa Shukla. 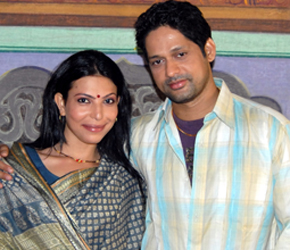 
Not many people know that Anurag is planning to launch the DVD of his series on Sony. "Yes he is all set to release DVD which will be of four hours. He has planned everything in advance," says Shilpa.

Rajuben is about Rajshree's journey, who being a daughter of a Gandhi fundamentalist, strays from his disciplinarian parentage and gets emotionally involved with Rohit, an underworld upstart, and goes to lead an entire gang in underworld.

Elaborating on her character Shilpa quips, "Rajuben is brilliant and the show portrays the journey of the girl. Whenever I get into her character, I don't feel like coming out of it. All I can say is that this is a story of every woman, and over here I'm just trying to give her the face."

"The journey also depicts the various men in her life, her father, husband and son. Basically, the story talks about the girl's life from the age of 20 to 50. We are shooting for it daily," she adds further.

She believes that Rajuben was meant for her. "Anurag had called me initially for this role, but due to date problem I could not take it. After few days fortunately I got the offer again and also had  time. I can say that I was destined to do this show," she chirps.

So are there chances to see you in any more shows on TV?? "Not at all, as I can't do all these sagas. I will die," she concludes.

Shilpa Shukla will also be seen grooving on the dance floor with her choreographer, Nishant in Jhalak Dikhhla Jaa 3.

The other three prominent Directors from Bollywood who are creatively involved in producing series for [email protected] 10 are Mahesh Manjrekar, Madhur Bhandarkar and Vikram Bhatt.

Talking about the DVD release of course, we know that the perfectionist, Anurag will never leave any stone unturned, even if it's a series on TV.

Tune in to Specials @ 10 which will offer you four different shows from Monday to Thursday at 10 PM only on Sony Entertainment Television..