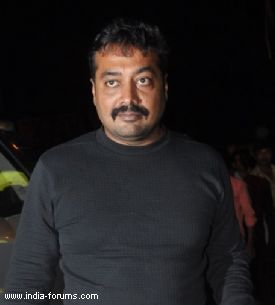 Filmmaker Anurag Kashyap has come on board to present award-winning documentary "The World Before Her", joining others like Shimit Amin, Nandita Das, Deepa Mehta and Lisa Ray to raise funds for the movie's nationwide campaign ahead of its April 25 release.

"I love this film and had heard about it a long time back. I want to make sure it gets to as wide an audience as possible. That is why I decided to get behind it. It is the first documentary I have launched and it feels like a narrative film," said the acclaimed director, who supports offbeat projects.

A six-month nationwide campaign for the movie was launched March 8, International Women's Day, with the support of Nandita, Lisa and Deepa. The trio believe that the documentary is a must watch for every Indian.

"'The World Before Her' is powerful, insightful and poignant. It's very telling of our times and the complexities we need to deal with, especially in the area of gender empowerment," Nandita said in a statement.

"Chak De India" director Shimit Amin raved about the documentary, by which he was "blowna way", saying: "I was scared and moved at the same time. This film is the only true portrait of anything that is going on here."

Apart from the theatrical release in metro cities, the makers aim to reach out to the wider audience by screening the film in educational institutes across the country and in parts of India where female infanticide and foeticide is high.

Joining the campaign are women's rights activists and former Miss India Pooja Chopra, who was a near victim of female infanticide. Pooja, who featured in the film "Commando", plays a key role in the documentary.

The makers of the film have set a goal of raising $50,000 in 40 days with the help of a crowdfunding organisation, Kickstarter and have managed to raise more than 40 percent of the amount in just over two weeks.

"The World Before Her" writer-director Nisha Pahuja says the idea of launching a crowdfunding campaign came up "because we wanted to ensure the film and its message travels far and wide and reaches people who normally would not have access to a film like this".

"Stories have the ability to change the way people think about an issue because they are non-threatening. In order for women's rights to really take hold in india, trying to get people to 'see" differently is key," she said.

The award-winning film, which premiered at Tribeca Film Festival (TFF) in 2012 has been screened at more than 125 International film galas and has won 19 awards and distinctions including best documentary feature at TFF.