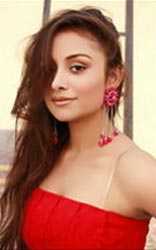 Anupriya Kapoor is one of the two newcomers (other one is her male love interest Nishant Malkani) in Star One's Miley Jab Hum Tum. The girl sports quite an impressive sheet of silky long hair which interestingly, is her actual hair!

When we enquired about her long tresses Anupriya says, "It's my real hair, not any wig!"

Anupriya Kapoor is the latest import from Delhi to the television industry. Originally intending to do hotel management she took up acting due to public opinion. She says, "Whenever I came to Mumbai to visit my relatives they used to tell me to try modeling or acting because they thought I had it in me. So after my 12th standard I decided to try it out and started attending various auditions. And one such audition for Endemol, landed me in MJHT!"

According to Anupriya, her character Suhani alias Nupur, strikes a balance between the characters played by Rati Pandey(Nupur) and Sanaya Irani(Gunjan). She says, "Suhani is not as outgoing and bubbly as Nupur but at the same time she is also not that sober like Gunjan. She is sophisticated, maintains a level of calmness but at the same time is not afraid to try new things."

So what is the USP of Suhani-Adhiraj  as a couple? "Mayank-Nupur and Samrat-Gunjan are very cute-couples. But the Suhani-Adhiraj pair is something you can call handsome," Anupriya signs off.

zohakhan7 9 years ago APK u rocked as taani,waiting for ur come back eagerly

riiddzzyy 9 years ago U rock..
Ur hair is So Silky .. and longgg..
Love u
God Bless

alishaL786 10 years ago suhani and adhiraj are really cute together :) i kinda like her outfits, they are simple and cute. but i like nupur and gunjan's outfits a lot better. She HAS to change her hairstyle! i hate it! its all in the front!!

sups2222 10 years ago yeah they r cute together i really like b0th of them...but suhaani needs to do sumthing wardrobe cange i dunt like her dressing stylr as it doesnt siut her...nut i love her hair

JATINTHAKKAR 10 years ago ADHIRAJ AND SUHANI'S PAIR STEALS MJHT SHOW.THEY ARE MOST HANDSOME AND BEAUTIFUL COUPLE IN MJHT AND IN THE WHOLE TV INDUSTRY.ANUPRIYA'S HAIR ARE REAL AND I LIKE HER HAIRSTYLE COZ SHE LOOKS SWEET AND SIMPLE YET STYLISH.
GOOD LUCK TO BOTH OF YOU GUYS.
YOU BOTH ARE ROCKING IN MJHT.

-Preeti- 10 years ago LMAO
i thought that was a wig ... i still cant believe thats her real hair