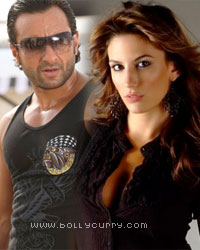 recently anointed tenth Nawab of Pataudi, Saif Ali Khan, has roped in yet another export from across the seas - Ann Lee Roberts.
The internationally successful South African model will debut in Bollywood in Saif's upcoming spy thriller, Agent Vinod. Though being heralded as a bikini babe, the model has always expressed a desire to venture into acting and considers this ambitious project her golden ticket into the career.
Roberts, who was born to an Italian father and a French-German mother, has previously worked in an Indonesian film before being signed by Saif. The popular beauty has also won an esteemed pageant in Johannesburg, is already a leading face for a denim brand and has worked alongside the likes of Kate Moss and Gisele Bunchen.
Rumours have it that Roberts will be playing a role that previously belonged to Priyanka Chopra.
Agent Vinod, which is being directed by Sriram Raghavan, also stars beau, Kareena Kapoor.

'Naagin 5' To Welcome Two New Entries in The Form of Karan ...
57 minutes ago