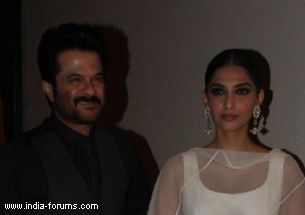 Bollywood's style icon Sonam Kapoor is single, and she would like to maintain that relationship status publicly until she makes a final decision about a person in her life. Besides, her father Anil Kapoor has "trained" her to say "just friends" when anyone asks her if she's dating someone or not.

The father-daughter duo came together for a tete-a-tete with filmmaker Karan Johar on his celebrity chat show "Koffee With Karan".

Karan asked the "I Hate Luv Storys" actress - "Currently apparently there is some boyfriend...is that not true?"

She retorted: "No boyfriends! I am very single."

Karan immediately turned to her celebrity father to ask: "She has no boyfriends?"

Anil smartly said: "She has friends...that I have trained her...kuch bhi ho bolo friends (whatever it is, say friends)! Just friends.

A startled Karan then asked for a reassurance: "This is your training?"

However, Sonam, who was earlier reportedly in a relationship with "I Hate Luv Storys" director Punit Malhotra, clarified her stance.

The episode of "Koffee With Karan" featuring Sonam and Anil will be aired on the show Sunday.

'Ishq Mein Marjawan 2' Actor Muohit Joshi To Debut as a ...
18 minutes ago

Fukrey 3 Team Kick-starts their Work ahead of Shooting; ...
45 minutes ago