Mumbai, Sep 4 (IANS) If Anil Kapoor's ever-smiling persona is even more prominent these days it's because the Belgian premiere of his first production 'Gandhi My Father' has fetched him a huge amount of charitable resources.

'Satish Gujral's painting depicting Gandhi-ji and his son Harilal was auctioned for $65,000. A gentleman from Dubai bought it. Plus we've collected $120,000 more for charity,' Anil told IANS from Antwerp, Belgium.

'Around 10-15 percent of the money will go to the Basket Giants. As you might know there's ethnic strife in Belgium. The only arena where all the races and communities come together is sports; hence our donation to basketball. 'Gandhi My Father' is also doing its best to bring communities together. Gandhi-ji's ideology of nation-first-family-later is really connecting with the audiences,' added Anil.

In November 'Gandhi My Father' goes to Tokyo for a premiere.

While officially Anil is in Antwerp for his film's premiere, there was another not-so-public visit made to nearby Amsterdam for medical reasons.

'It's my ankles. They've been giving me inflammation problems for 15 years now. I've to go through this endoscopy and various other tests. By chance I met Dr. Anand Joshi, who's the only doctor in the world who treats my ailment. He told me in Mumbai to come and see him in Amsterdam when I was in Antwerp. 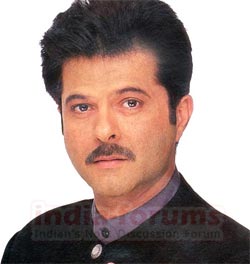 'It was just a short drive. The doctor had no time till next month. But I insisted. I hope he finally cures me. Right now I'm ankle-deep in trouble,' laughed Anil.

The Belgium premiere of his film went like a charm.

'Gandhi My Father' has changed my life. It's connecting with people all over the world. The film's journey has begun. Wherever we've gone with the film it's got a standing ovation. I feel everything I've done in the past pales in comparison. I made a truthful film with no conventional trappings. I've never seen anything like this before in my entire career of 35 years.'

The premiere in Antwerp held at the posh Metropolis had an almost all-European attendance. However, the film's protagonist Akshaye Khanna was conspicuous by his absence.

'Akshaye couldn't come because he was shooting for my production 'Short Cut' in Mumbai. However, other members of the cast Darshan Jariwala, Shefali Shah and my director Feroz Abbas Khan are with me.'

As producer, Anil has fluid plans.

'If I get 10 exciting scripts in one year I'd produce them all. If I get just one exciting script in 10 years, I'm fine by that too. But my 'Gandhi' director Feroz Khan is my creative partner in everything I do now. All my productions in the future will have directors working for themselves, not for me,' said Anil.