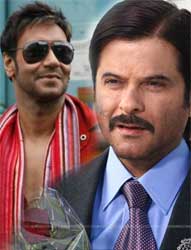 Ajay Devgan and Anil Kapoor, two of our industry's most talented actors, have graced the big screen for decades but for some reason have never crossed paths in the same movie! Anil may have worked with Kajol Devgan in Hum Aapke Dil Mein Rehte Hai but so far the two actors have not shared screen space.

Devgan and Kapoor recently met while Anil Kapoor, was overlooking the shooting of his upcoming release 'No Problem',
at Filmistan studios.
Devgan, who was at the sets for Amita Mangat's 'Atithi Tum Kab Jaoge', and almost immediately, Anil hugges Ajay and asked, "I wonder why the two of us have never worked together?"