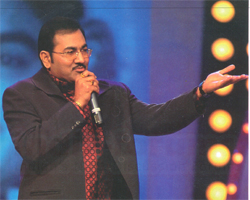 Sudesh Bhosle looked very emotional after been awarded with the Mother Teresa Millennium Award for his contribution to music. The singer, known to be the voice behind non-other-then Bollywood’s shahenshah Amitabh Bachchan, may have won many awards in the past, but he feels this one to be very prestigious.

"It was very touching and a great honour coming from such an institution," says Sudesh Bhosle. The veteran singer who received the award in Kolkata has a special affection for the East and has already sung innumerable songs in Bengali, Nepali and Oriya, too.

We wish this talented singer a hearty congratulation and we eagerly look forward to hear his next songs from Alladin where he has again sung for the Big B.
Featured Video