Director R. Balakrishnan, also known as Balki, has decided to release his role-reversal drama 'Paa', starring Amitabh and Abhishek Bachchan, on Nov 13 as a tribute to Children's Day.

'It's a film about a child within a man 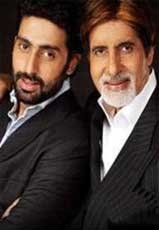 Featured Video
and a man within a child. And I can't think of a better tribute to a child than Children's Day,' says Balki, who completed shooting the film in England recently.


Balki has shot his two feature films - 'Cheeni Kum', an unconventional love story between a 30-plus woman and a 60-plus chef, and now 'Paa' - in Britain because he loves the country.


'We shot 'Paa' in my favourite location England. Throughout the stint in Cambridge we were at sea never on land. I love shooting in London. If I have my way, I'd shoot all my films there,' he said.


Balki took up the challenge of projecting the Big B like never before in 'Paa'.


'In 'Cheeni Kum', I really didn't have to do anything. I made him play himself. Here in 'Paa' I had to bring out that child within him which has always been there. We tapped that part of him. It wasn't easy for Amitji to play a child at heart.


'Fortunately, Abhishek and Vidya Balan too are extremely intelligent actors. Vidya has played such a charming mom. Throughout the film they behave as if Amitji is their son. For Abhishek, this was his chance to get even with his dad,' said the director.


Any regrets about not casting Tabu again?


'After what she did with Amitji in 'Cheeni Kum', it wasn't possible to cast her in Vidya's role.'


Balki is not bothered with how the audience will accept the two actors in reversed roles. 'There's no point in making a film if it doesn't push envelopes. I won't do a film that doesn't challenge me and my actors.'


Another ongoing leitmotif in Balki's cinema is the music of Ilayaraja.


'He's god. He has been a major source of inspiration. I don't think India has known a better music composer. Sadly one-half of India has not heard him enough.'


For 'Cheeni Kum' Balki specifically asked Ilayaraja for tunes from his Tamil films.


'I wanted Hindi moviegoers to hear those times. Even in 'Paa' I've transposed some of his South Indian tunes into Hindi. It's not that important to be original. It's more important to do what you believe in,' he said.


Balki is miffed that the Big B's Progeria look has been leaked out. 'Fortunately that's only a part of his look. No one came on the set to see how he looks on camera. The makeup person was given a computer-generated picture of Amitji. He improvised a lot on that and added traits from real Progeria patients.'