Mumbai, April 23 (IANS) Bollywood superstar Amitabh Bachchan in his blog has lashed out against Shatrughan Sinha's insinuations that the nominations list of the International Indian Film Academy awards were fixed.

He says in the blog: 'A section of the print media carried comment from my colleague and friend and neighbour, Mr Shatrughan Sinha. It reportedly quoted his reactions to the nomination list of the IIFA Awards, wherein he has purportedly stated that ' Sab kissika beta hai, ya kissiki bahu, ya kissiki biwi ' , and the media adding there interpretation to it, stating that this was directed to a particular family of 'guru' fame.

I believe what is being insinuated is that there is partiality or some 'fixing' in the choice of the nominations carried by IIFA. And as the report concluded, the indica 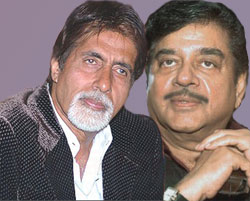 Featured Video
tion was towards one family, not difficult to guess which one.

I am surprised at this observation, especially since, during the time of the National Award selection for Best Actress in one of the past years, when the Award went to Raveena Tandon, it was alleged that Mr Shatrughan Sinha's wife, the lovely and graceful Poonam, a great friend of Raveena's mother had recommended the appointment of MacMohan, the brother of Raveena's mother, on the board of the Jury ( structured by the Govt., in power - in this case the BJP, of which Mr Sinha was a Minister of State ) in order that he may cast his vote in favor of Raveena Tandon.

If this alleged story is true then i do value Mr Shatrughan Sinha's alleged statement of 'Sab kissika beta, kissiki beti, kissiki biwi' - you are so right Shatru !!

Of course this does not take anything away from Raveena's very deserving Award - she has been a wonderful and talented coartiste in many films of mine, or, MacMohan, the Sambha of Sholay, who has remained a dear friend and has worked with me in several films. As has Mr Shatrughan Sinha !!

And may i also state that IIFA nominations come from the film fraternity through computerised voting systems, audited and compiled by Price Waterhouse Coopers, an International Company of repute and standing.

And Shatru !! I have seen some very encouraging reports of the film, where your son is being introduced to this great Industry. May he prosper and succeed even more than his illustrious father and may he never have to face a slighted accusation of 'fixing', when his name comes up for an Award in the future !!

I post separately a speech that i made at the book release in Delhi recently. The book is called 'Icons' and is written by the renowned senior journalist Anil Dharkar. It compiles 60 years of Independence and the Icons that made an impact on the country. I thought it was a pertinent piece. It never received any attention by the media. Perhaps it was not of their standard. I would love for you to read it and send me your impressions of it.