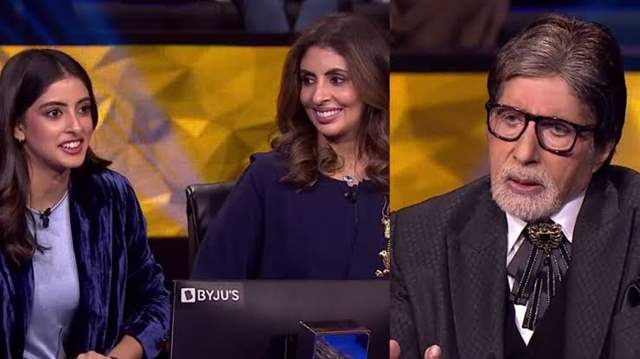 The channel has shared a new promo featuring Shweta and Navya on the hot seat while Mr Bachchan sits on the opposite seat as the host.

Also when Shweta asks Amitabh to share how does he feels about the show completing 1000 episodes.

"Aise laga meri duniya badal gai (it seems as my whole world had changed)." The promo then shows previous crorepatis from Harshvardhan Navathe, who was the first crorepati on the show in 2000 to Sushil Kumar, who won the top prize of crore in 2011.

Their winning moments run high on excitement and celebration with even Amitabh joining them in the mood.

In the later part of the promo, Amitabh is seen continuing to play the game with Shweta and Navya and says,

The viewers cheered for Amitabh in the comments section.

A fan said, “Sony, you have created history but never remove Amitabh, no one is better than him.” Another complained, “I have been trying ever since the show started but my name is yet to come.”

Amitabh continues to host celebrities on the weekends. He has hosted all from Hema Malini, Rani Mukerji, Saif Ali Khan to Deepika Padukone, Kajol this season.