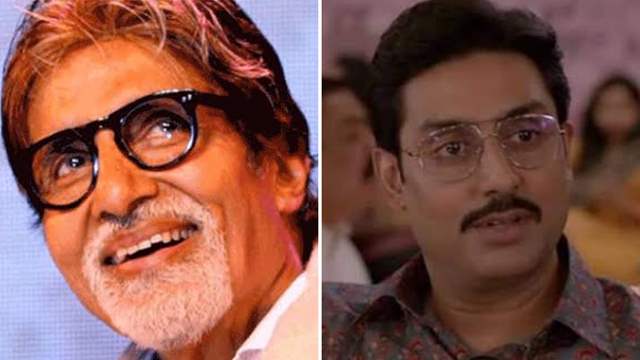 Abhishek Bachchan’s film ‘The Big Bull’ premiered online and has been receiving rave reviews from the critics and the audiences, who have also lauded AB’s performance calling it his career’s best.

Well, the most special review comes straight from his father and superstar Amitabh Bachchan. Big B has watched his son’s film and his reaction is too sweet for words.

Taking to his blog, Amitabh Bachchan expressed his emotional reaction as he wrote, "Aahhh .. children shall always be in the softest of spots no matter what !! And when they do something remarkable the pride and the chest swells further .."

He shared how he is like any other proud father after watching his son’s film. "For a Father it is ever a moment of great pride to see their ‘progress report’ prosper and do well .. I am no different from any other Father .. the mention of such always brings emotion and tears .. particularly when there is an exhibition of immense value ...”

The Big Bull had a direct to digital release and Amit ji has beautifully expressed the feeling of watching the film online, away from his family members. He wrote, "So despite the fact that Big Bull had been seen privately within the confines of the home much earlier, the excitement of watching it when the entire world shall be seeing it at the same time, was different .. The drive back from work was indulgent .. connect mobile to Disney Hotstar .. on with the dongle for internet connectivity .. open the packet of biscuits and the aerated water and .. there he is .. my SON ...”

"Stop the relay on the reach of Jalsa .. rush up to the tv and continue as we were before, Face Timing in multiple presence imagery with Kolkata, New York and Lucknow and Shweta downstairs all at once and the joy of sharing our love and appreciation .. Life has become distant .. Jaya in Kolkata campaigning , Navya and Agastya in NYC on study, Abhishek in Lucknow on shoot , and Shweta and me out of shoot and home due curfew .. BUT .. thank you FT we get all connected on one screen at the same time talking watching .. such a delight .. and such a wonder of modern technology," he added.

Speaking of The Big Bull, the film is based on the life of stock trader Harshad Mehta, and also stars Ileana D'Cruz, Nikita Dutta, Sohum Shah in key roles.