View Profile
Aziz Mirza's Kismat Konnection seems to be all set to determine the fate of many telestars. Vishal Malhotra, Karanvir Bohra & Amit Verma – three popular telestars are pinning their hopes high on the movie to get a foothold in the film industry. Amit had been tight-lipped about his role in the film, but after chasing him for details on his role and after a long chuha-billi g 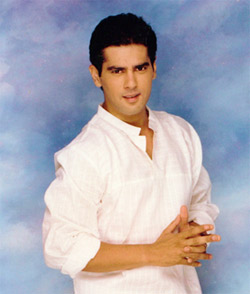 Featured Video
ame, I finally managed to get him open up.

"I play the role of Karan – a typical young guy of today who has sky high ambitions," says Amit. Rumours have been flying all over the place about him playing Vidya Balan's love interest in the film. Ask him about that and all you will get is a meaningful smile in return. "Just wait and watch. But I can share this much with you that almost every scene in the movie where I am there, Vidya and Shahid are with me," says the handsome hero.

How was his experience working with Vidya? "I was extremely nervous. So much so that in the first shot I was giving for the film, I started fumbling and getting butterflies in my stomach," remembers Amit. "Aziz Mirza noticed this and came and comforted me. Even Vidya and Shahid came up to me and boosted my confidence by making the atmosphere very congenial and friendly. I don't think I would have been able to do anything without their help," discloses the boy.

Did you see the rushes? "Not the rush print, but I saw almost the entire movie while dubbing for it. It has come out really well. Standing in a time where all we get to read and watch is about terrorism, murders and mayhem, this kind of movie will definitely bring back the smile to all viewers' faces," concludes Amit. All the best for your big screen connection, Amit. -Srabanti Chakrabarty