A man shown with a golden heart often ends up being the 'Bad Man' on television and this is what exactly happens in Sahara One's Doli Saja Ke, produced by A.K. Films.

Featured Video
As we all know, the present track had a mystery man following Anupama (Barkha Bisht) who schemed to kill Daksh (Indraneil Sengupta).

Tonight's episode reveals that the obsessive lover of Anupama is none other than close friend and support, Samar (Amarr Upadhyay). In fact, he happens to be the man who had planted the black-hooded guy, played by Yuvraj Malhotra to stalk Anupama.

According to our source, "Samar turns out to be an obsessive lover similar to what SRK was in the movie Darr. His only aim in life is to get Anupama for which he can go to any extent. He is so mad in love that he writes Anupama's name with a knife on his hand".

We talked to Producer Aroona Irani on the big revelation of Samar who said, "It's always a bigger shock when a person shown as good is revealed to be bad. Tonight's episode will come as a shocker when Anupama will get to know that Samar is the man who has been tracking her. This obsessive lover track will go on for another 8-10 episodes after which a new track is being planned for Anupama and Daksh".

We tried calling Amarr Upadhyay, but he remained unavailable for comments. 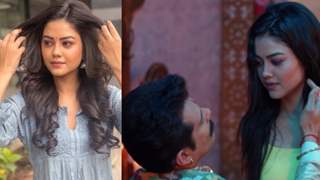 12 years ago I knew he is stupid samar. NOW he'll emotionally torcher anu..I wish daksh saves anu and beats samar till he is dead!

12 years ago thanks. i never thought that he would be the bad guy

12 years ago altho i never watch this serial... it sounds so interesting !! i always wished dey could make one whole serial based on darr's story.... cos i love d movie Darr..!