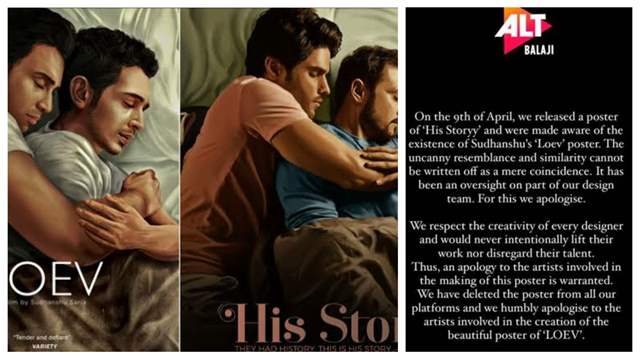 Ever since the poster and teaser of Alt Balaji's upcoming project, His Story came out, it was in the news and even initiated a controversy but for the wrong reasons. We reported how and when the poster of the show was released, it led to a few makers going on to allege with proof that their poster was straight away ripped off from their own film called LOEV.

This led to not just the director of that film but a few others also alleging plagiarism and also condemning this act through a series of tweets. While the poster was removed later, a public statement was yet to be made by Alt Balaji or Ekta Kapoor.

That has happened just a while ago, where Alt Balaji has issued an official statement on the matter. In the statement, the streamer isn't giving any excuse about the poster and just apologizing to the makers of LOEV along with assuring that it has been removed-

It is indeed a relief to see the streamer accept the mistake and a good lesson on how plagiarism is always the worst thing creators can adapt.