View Profile
Recently it has been falsely reported that Karisma Kapoor and her husband Sanjay Kapur have moved out of her mom Babita's place apparently because the son-in-law and mother-in-law were not getting along together. The report is, however, completely untrue because according to Lolo, Sanjay and she are in the process of buying a new and bigger apartment in Bandra and would be shortly shifting into it. 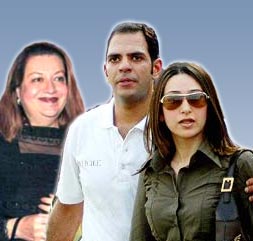 
A friend close of the couple clarifies that these stories are completely untrue. The friend says, "It is very natural for all married couples to need space. And with a baby around, there is a bigger space crunch. Another issue is that Kareena too stays with her mom,” adding, Besides Karisma found it very inconvenient to entertain guests as Sanjay is in the habit of often entertaining people whenever he is in the city. And since it was getting a bit crammed up, they have presently shifted to an apartment at May Flower, near Olive"

The friend adds, "But right now, the couple is also in the process of buying a new place in Bandra for which the paperwork is on. Once that's done, they will shift to their permanent home. Also, Bebo may shift to her new apartment in Bandra soon as grown up children need their personal space too."

The friend also clarifies that both Lolo and Babita were quite upset over the unnecessary fuss created over a non-issue. -(SAMPURN)