After being in news, be it about his reported relationship with Madhura Naik, or the recent birthday party he threw for his beau Sara Khan, Ali Merchant is now gung-ho about his new project Rubi, a BAG Production on 9X. 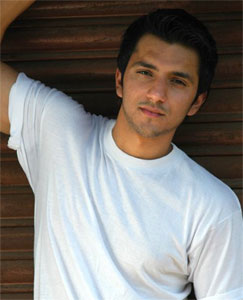 Featured Video
He plays Kunal Oberoi, a hot-shot architect with a great sense of beauty. A perfectionist in life, whether it is life or love, the guy believes in writing his own destiny. “I chose to take this role as it is quite different from that of other protagonists shown in television”, quips Ali.

Ali had to work on his body for months to fit in the shoes of the character. “I have had some strenuous workout schedules in the last few months. But I can in no way get a body like Salman Khan, but I have worked to get close to the body of the likes of Ranbir Kapoor”, says the actor. Adding on, he quips “I will be seen wearing a typical kind of attire in Rubi, which is a jacket and a tie”.

The actor feels that BAG Productions have taken all the efforts to give a realistic story-telling to the audience. “The story is all about Rubi who takes shortcuts to achieve her goals in life”, chips in Ali. When asked to differentiate between his role in Rubi and Ek Thi Rajkumari, the actor states, “I play a laid-back man in Ek Thi, but here it is a very energetic character who is always on his toes”.

You have been with BAG Productions for sometime now, is there any specific reason for that? “I am getting offers from other production houses also, but I believe that when we are working with one production house, there is a bond which is developed and it’s very easy to work”, avers Ali as he signs off.

best of luck to him and his new serial!