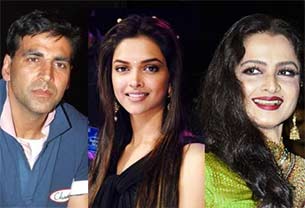 Deepika Padukone is a style icon herself, but according to her actor Akshay Kumar is the best dressed man in the Hindi film industry while veteran actress Rekha is her favourite from among women.

Deepika has shared screen space with Akshay in "Chandni Chowk To China", "Housefull" and "Desi Boyz."

"The best dressed man (in the industry) is Akshay Kumar. It's purely his effortlessness that makes him look the way he does. I think the fact that he has always been so athletic that really adds to the way he carries off clothes," the actress told reporters here Thursday.

Among women, Deepika named veteran actress Rekha as her top choice when it comes to dressing.

"She is someone who has always dressed the way she wants to. Trends have come and gone, but she stands by something she believes in and she has stood by that and I appreciate that," said the actress on the sidelines of the launch of a limited collection of Van Heusen designed by her, Thursday.

Kangana Ranaut is in Awe of Yogi Adityanath; Applauds his ...
28 minutes ago

Farhan Akhtar is excited to kick-off the opening match of ...
35 minutes ago

Arjun Bijlani on music video with Reem Shaikh: I feel Ishq ...
55 minutes ago