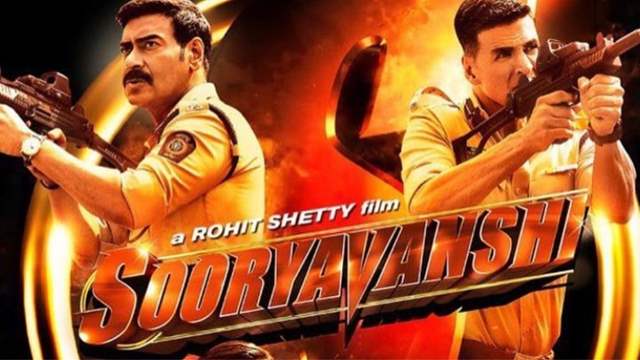 Sooryavanshi, starring Akshay Kumar and Katrina Kaif, has provided a ray of hope at the box office. On Friday, the Rohit Shetty film opened to an estimated 26 crore in theatres.

Sooryavanshi debuted to positive reviews on Friday. It clashed with the Hollywood film Eternals, which was given critical acclaim worldwide.

“The early territory numbers (of Sooryavanshi) are coming in very similar to Golmaal Again but it's likely that Mumbai will lag due to Maharashtra being at 50% occupancy,” a Boxofficeindia.com report stated.

“The collections of Eternals are also solid and could finish near the 8 crore nett, making it the best result for Hollywood post the pandemic. Together, both films will be looking at a 33-35 crore nett total for the big Diwali holiday which is similar to what Housefull 4 did in 2019 on this very day,”

Sooryavanshi was released on 1300 screens in 66 countries worldwide, but the exact number of screens in India has yet to be revealed by trade pundits.

Many families were seen lining up outside cinemas a day after Diwali to watch the long-delayed cop drama. Sooryavanshi joins Rohit Shetty's cop universe, which he established with Singham and Simmba, and has been in theatres since March 2020.

Reliance Entertainment Group CEO Shibasish Sarkar said they are thrilled with the response to the film. “After a long time, we see housefull boards outside single screens and multiplexes. A day after Diwali is always a big day from a film point of view. Cities like Mumbai, Delhi, Gujarat, Pune, UP, Lucknow, Varanasi among others are showing unprecedented response. It's like the good old days hopefully, as audiences are back to theatres.”

From July to August, several states, including Delhi, Rajasthan, Punjab, Haryana, Madhya Pradesh, Gujarat, Andhra Pradesh, and Telangana, reopened cinema halls. However, theatres in Maharashtra, a key market for the Hindi film industry, reopened with a 50% capacity on October 22.