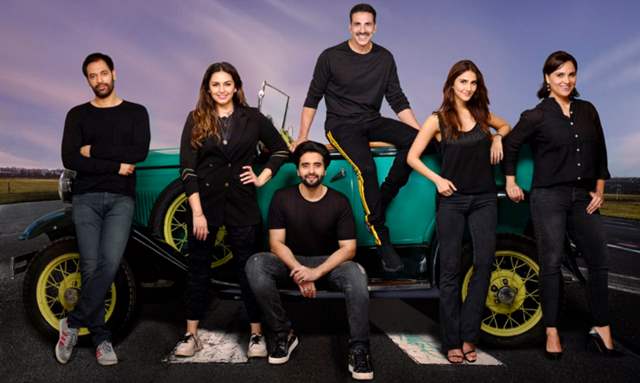 Bollywood stars are currently waiting to resume work. Many actors breathed a sigh of relief after the Government of Maharashtra finally approved the guidelines submitted by FWICE (Federation of Western India and Cine Employees) and filmmakers can happily go back to shooting. However, they would also need to maintain social distancing norms.

Meanwhile, Akshay Kumar has announced the shooting details for his upcoming film Bellbottom. Taking to his Twitter handle, Akki officially stated that his espionage thriller ‘Bellbottom’ gets ready to go on floors next month.

He even shared a picture of his co-stars Vaani Kapoor, Huma Qureshi and Lara Dutta.

Last week, Akshay announced that Vaani Kapoor would be joining him as the lead in the upcoming film which is helmed by Ranjit M Tewari. Clearly he is thrilled to be returning to work post the break due to COVID 19.

A Times of India report quoted the Kesari actor saying, “We are glad to be able to start shooting for ‘Bellbottom’ after the long lockdown. The team has made special plans and taken precautions, keeping the current situation in mind. I am looking forward to the industry to begin doing what it does best and entertain the audience again.”

Maintaining social distancing norms and following the guidelines submitted by FWICE would be the top priority for the whole crew. Furthermore, Producer Jackky Bhagnani also revealed that there are a number of people dependent on the film industry starting up again.

“All our activities will be minutely monitored to make sure no one is at risk, and we’re following all the issued guidelines. The cast and crew are on board and offering full cooperation,” said the producer.

"I feel Proud when I say that ours is the Platform of the ...
7 minutes ago

The Dispute Between Gabrielle Union & 'America's Got Talent' ...
8 minutes ago

Aamir Khan Can't Contain his Happiness after Turning a ...
53 minutes ago

Shekhar Kapur Appointed as President of FTII Society & ...
59 minutes ago