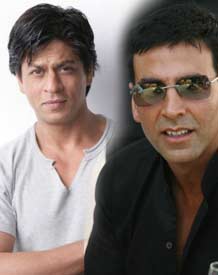 The season in bollywood this summer seems to patch up! Bury the past, forgive, forget and move on. It started with Karan Johar's B'day party where shahrukh apologised to Aishwarya and the long drawn cold war between the Abhishek and Kareena was broken. The latest to join the bandwagon is "Singh is King" Akshay Kumar. The so called Bollywood's King is trying hard to patch up with the so called Baadshah Khan. The two have had a cold war between them ever since Akshay had threatened Shahrukh's numero uno status in Bollywood with four back to back hits in 2007.

Akshay Kumar recently made an effort to patch up things & bride the gap by posting a message for Kolkata Knight Riders (KKR) team  owned by SRK. The message read:-" I'd like to send my best regards to Shah Rukh and his team. You've put up a good fight. Dont worry guys, you will always be loved." This message was posted after KKR had a disastrous tournament. Shahrukh Khan is need of such moral boosters to still have faith in his team and Akshay seems to giving that to his friend turned foe.
Well lets hope both bury the hatchet and move on. After all its the season nah!
Featured Video