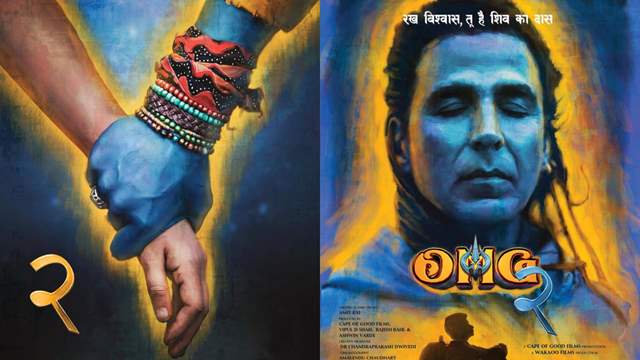 Akshay Kumar, who played Lord Krishna in the 2012 film OMG alongside Paresh Rawal, is set to reprise the role for the film's sequel. The actor has begun filming for the film and announced it with his first look poster.

In the film, Akshay Kumar will play Lord Shiva. Akshay is shown in the poster with long hair and blue skin, resembling Lord Shiva. He shared the poster and wrote, “Need your blessings and wishes for #OMG2, our honest and humble attempt to reflect on an important social issue. May the eternal energy of Adiyogi bless us through this journey."

With the release of OMG 2, Akshay Kumar plans to speak about relevant issues. The actor, who shared the new poster, described the film as a "honest and humble effort to reflect on important social issues." In addition to Akshay, Yami Gautam and Pankaj Tripathi will play important roles in this film. The film is directed by Amit Rai.

OMG 2 is written and directed by Amit Rai and produced by Cape of Good Film, Vipul D Shah, Rajesh Bahl, and Ashwin Varde.

The team had previously completed its Mumbai schedule with Yami Gautam and Pankaj Tripathi. Akshay will join the team for the Ujjain tour. The team was scheduled to begin shooting for the Ujjain schedule on October 13, but it was pushed back after a few crew members tested positive for COVID-19.

According to media reports, the film's production began on October 21 in Ujjain's Ramghat. They have a 17-day shoot schedule in MP. As per reports,the cast and crew of the film will be shooting in Ujjain at Shree Mahakaleshwar Temple, Ram Ghat, Kaal Bhairav Temple, and Tower Chowk. The film will also be shot in Ujjain's Mahakaleshwar temple complex; however, due to the film's production, the devotees' darshan system will be unaffected. A police force has also been deployed to ensure that neither the devotees nor the film's unit face any difficulties.

+ 4
1 months ago Arre, of course Akshay will don the avatar of Lord Shiva 🤣 Had it been anyone else, who wasn’t the chamcha of the government, then there would have been a hue and cry over just the poster itself. I have nothing against Akshay as an actor but the privilege Canadian Kumar has for being an Indian “Modi-fied mango” lover is well known by now.