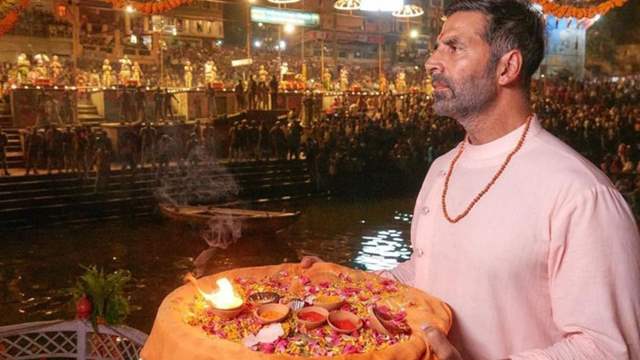 The actor is in Varanasi with his co-star Manushi Chhillar, and we've seen some incredible photos and videos of them asking for God's blessings. Aside from the photos, there is one video that has gotten a lot of attention, in which we can see Khiladi Kumar diving into the sacred Ganga river.

In the video, we see Akshay Kumar, donned in a light pink kurta and white pyjama, stepping on the side of the boat and jumping into the Ganga river within seconds. We can see lifeguards approaching him as soon as he leaps, ensuring that the actor is safe. The Atramgi Re actor is seen taking a dip in the sacred Ganges. This video has received a lot of attention from fans, and it quickly became viral.

He captioned the post, ‘Team #SamratPrithviraj in Varanasi yesterday. Film releasing in Hindi, Tamil and Telugu on a big screen near you on 3rd June. @manushi_chhillar #DrChandraprakashDwivedi @yrf’

Meanwhile, Akshay is currently looking forward to the release of Samrat Prithviraj on June 3 wherein he will be seen in the titular role.

Apart from Khiladi Kumar, the movie will mark the debut of former beauty queen Manushi Chhillar and will also feature Sanjay Dutt, Manav Vij and Sonu Sood in the lead. Akshay will also be seen in movies like Ram Setu with Jacqueline Fernandez and Nushrrat Bharuccha, Mission Cindrella with Rakul Preet Singh, Selfiee, etc.