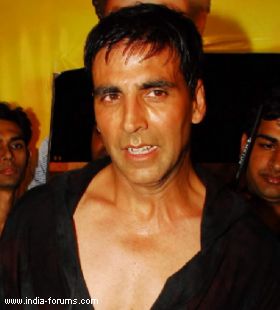 Actor Akshay Kumar is proud that a film like "Holiday - A Soldier Is Never Off Duty", which focuses on terrorism and sleeper cells, managed a successful run at the box office. He is also glad that the makers chose a "commercial comedian" like him to portray a "heavy serious role" of a soldier.

"Holiday...", released earlier this year, acquired a hit status in a year when there aren't that many successful films happening. Akshay has another view.

"Excuse my bluntness, but the triumph of 'Holiday...' has nothing to do with whether other films are running successfully or not...It has everything to do with the fact that such an honest, admirable film, was recognised by friend and foes, audience and critics the world over, and was admired and appreciated for all it's worth.

"That is what makes this wonderful blockbuster commendable," he said.

Initially, some of the skeptics had tried to write off the movie, directed by A.R. Murugadoss.

"'Holiday...' has fought against all odds, from schedules, to accidents and injuries. I couldn't be happier for the makers and creators. We all did well with this one," said Bollywood's beloved 'khiladi', who featured with Sonakshi Sinha in the movie.

"Holiday" was a mood-change for your career, considering it's comedies that you are most solidly identified with?

"My place will always be with action and comedy, it's where my heart is, and that's where and when my blood pumps. But my ambitions as an actor will never stop growing.

"Making films like 'Holiday...' inspires me to step out of my comfort zone with confidence, because deep down you know at the end of the day, no matter what the outcome, you know this project is worthy," he said.

Now post "Holiday...", Akshay will be seen in a comedy titled "Entertainment". Did "Holiday" seem risky?

"I'm grateful to those that took the chance with me, and chose a 'commercial comedian' to portray such a heavy serious role. I may have been around for a while, but there is competition out there everyday and everywhere.

"It will always feel damn good to know you're wanted for roles that can change many people's paths in life."

"Holiday" was presented by Reliance Entertainment and produced by Vipul Shah, with whom Akshay has given hit films like "Namastey London" and "Waqt - The Race Against Time" in the past.