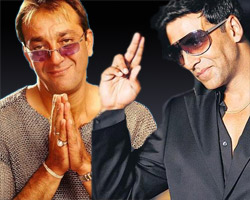 Akshay Kumar seems to be the perfect choice by Colours for hosting their upcoming reality show Khatron Ke Khiladi. This dare devil, who’s known for performing dangerous stunts in his films, had a close encounter with an accident which would have proved fatal. Another actor who was accompanying Akshay in this dangerous stunt was our very own Sanjay Dutt.

The two Bolly-stars accompanied by their photographer Peter Zuccarini were filming an underwater scene in Bahamas while a ship blasted to create special effects for their upcoming film Blue, produced by Shree Ashtavinayak Cinevision and directed by Anthony D’Souza. Even though Akki, Sanju and the photographer were fifty feet under the sea, they felt the burning sensation and had to quit shooting and come out of the water.
Featured Video