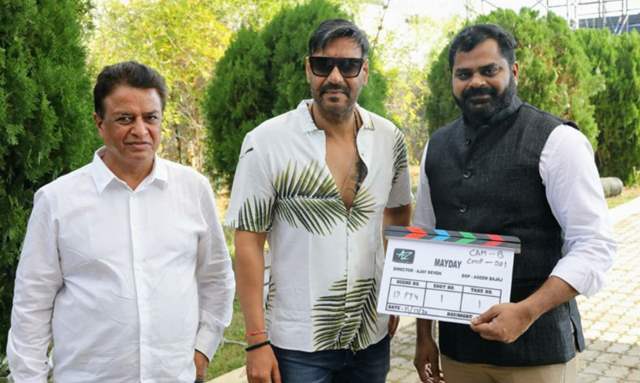 The coronavirus pandemic has wreaked havoc in the lives of people. The horrifying virus has brought the world to a standstill and many nations are trying their best to combat this virus. While the government has taken up strict measures to battle the deadly virus, everyone is working hard to avoid transmission of the novel coronavirus by keeping their surroundings clean and maintain social distance.

Now, months after Ajay Devgn’s upcoming film MayDay was announced, it has been making it to the headlines for its star cast including Amitabh Bachchan, Ajay Devgn, and Rakul Preet Singh.

However, in a recent turn of events, the film has come under the official’s radar as the recent Mid-Day reports suggest that the film’s crew members have been booked by officials in Vasai for flouting COVID-19 rules. The film is produced under the banner of Ajay Devgn Films.

The report further added that the crew kick-started shooting in Vasai on March 24 on Suncity grounds. A dozen people, including the location manager, claimed to have taken permission from the tehsildar for the filming, reported Mid-Day.

Police Inspector Bhausaheb Ahire of Manikpur police shared that they discovered crew members of MayDay violating COVID-19 rules during patrolling. The official further revealed that around 15 people on the set were not following the rules, out of which some were not wearing masks or others had masks hanging down.

Ahire also added, “Around 15 people at the set were not following COVID rules. Either they were not wearing masks, or it was hanging down to protect their chins. They were also not maintaining social distancing. We have asked them to bring down the set.”

A case has been registered at the Manikpur police station under Sections 188 (Disobedience to order duly promulgated by public servant) and 269 (Act likely to spread the infection of any disease dangerous to life) of the Indian Penal Code.

The registered case was also under the provisions of the Disaster Management Act, mentioned the report.