Bollywood superstar Salman Khan has bonded so well with Pakistani singer Adnan Sami's son Azaan that he took the youngster for a ride on his buggy scooter.

Azaan, who is currently visiting his father in Mumbai, attended Salman's birthday 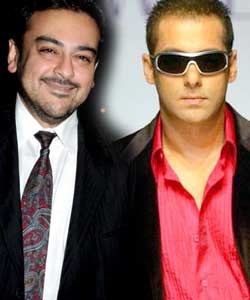 Featured Video
celebration on his farm at Panvel Saturday. Salman took to Azaan in a big way and made sure the boy felt comfortable in the new environment. In fact, all the guests including Adnan were agog when Azaan and Salman disappeared for almost an hour.

'Later I came to know that Salman took Azaan for a ride on his buggy scooter on the beach. My boy was simply blown way. He says it was one of the best experiences of his life,' Adnan told IANS.

Azaan is the son of Adnan and actress Zeba Bakhtiar, to whom Adnan was married for a short time.

'His hair was windswept when he came back with Salman and he had that far-away look in his eyes that I hadn't seen while Azaan did the other fun things in Mumbai with me. Salman is a very dear friend. And although he had hordes of birthday guests to look after, he made my boy feel special and comfortable. I'll never forget that,' Aznan added.

And now Azaan want a buggy scooter of his own.

'Of course, I'll get it for him. There's nothing I won't get Azaan. All he has to say is he wants it. On the way to Salman's farmhouse in Panvel Azaan tasted Mumbai's junk food, pao-bhaji, bhel-puri etc for the first time. Now he wants to take some of that also back for his mother,' said Adnan.

Azaan also wants to take his father's pet golden labrador Rock to Pakistan. But apart from the practical problems of transporation, there's an emotional obstacle to the canine migration.

'There's nothing I'd deny my boy. But this is between Sabah and Azaan. Rock is very attached to my wife. And now he has taken a shine to my son in no time at all. My dog even sleeps comfortably on the same bed as my son. Azaan does want to take him back.

'So it's now Salman's buggy, Sabah's dog and Mumbai's bhel-puri that my son wants to take back to Karachi,' said Adnan.