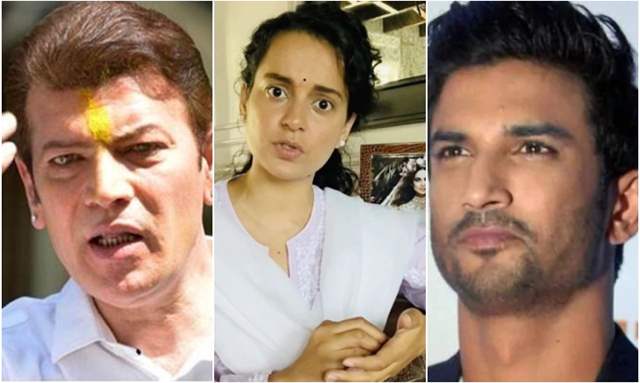 Actor Aditya Pancholi has finally broken his silence over his son Sooraj Pancholi’s name being dragged into Sushant Singh Rajput’s death case. Several reports also alleged that Sooraj was in a relationship with celebrity manager Disha Salian who passed away a few days before Sushant’s demise.

Aditya Pancholi denied any connections of his son to both the cases and told Aaj Tak: “One foolish guy posted and all these major media picked it up and made it into an issue. This is not fair. Everyone has to be responsible, we had to go through so much pain. I am not on social media but they are trolling Sooraj that he is a ‘murderer’. This is the reason he had to turn his comments off. What is this?”

Earlier, Sooraj’s mother Zarina Wahab also stood in his support and lashed out at the reports linking her son’s name to Sushant Singh Rajput’s death case.

Aditya Pancholi also reacted to Kangana Ranaut’s comments against the film industry in Sushant’s death case and said: “Jis thaali mein khate hain usme chhed nahi karte hain (Do not dig a hole in the same plate you eat in).” He also added that his family has an ongoing defamation case against her and asserted that the actress is not supposed to talk about him and his family.

For the unaware, Kangana and Aditya’s tiff comes back to a long time when the actress had accused him of assault. She told NDTV in an interview, “When this man who used to be my father’s age, he hit me so hard that my head was...I fell on my head on the floor and it started to bleed. I must have been 17 or something. I picked up my sandal and I hit his head hard and it started to bleed as well.”

Pancholi also took a dig at Kangana as he asked her to return her Padma Shri now that her nepotism theory in Sushant Singh Rajput’s case has been disproved. “Tell her to return it now because she is wrong about Sushant Singh Rajput. His father filed a report in Patna in which there is no angle of nepotism mentioned. He clearly said that Section 306 is on Rhea. When Kangana was naming industry people, she actually wasted everyone’s time” the actor told the news portal.

Earlier, Kangana Ranaut had told Republic TV: “I am telling you, if I have said anything, which I can’t testify, which I can’t prove, and which is not in public domain, I will return my Padma Shri.”