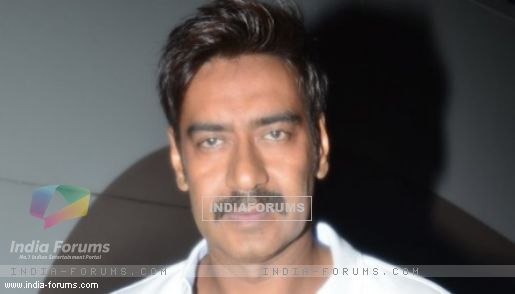 Filmmaking is team work and when a film doesn't work, actors should take discredit for the failure, suggests actor-filmmaker Ajay Devgn, who is gearing up for the release of "Singham Returns", his ninth film with director Rohit Shetty.

Currently director Sajid Khan, a college friend and colleague of Ajay, is in the line of fire for the "Humshakals" fiasco. His cast is blaming him for its box office debacle.

"When a film works, every actor tries to take the credit for the film, but when it does not work, you should take the discredit too because filmmaking is a teamwork," said the 45-year-old in a group interview.

The actor-producer, who has come a long away since his first film "Phool Aur Kaante" in 1991, admits that the director is the captain of the ship and as a result the onus is on him.

"Yes, the director gives maximum inputs. Sometimes he says, 'Trust me'. But somewhere it's your mistake too. If you felt the script wasn't right, then why did you do it?

"I accept my fault in 'Himmatwala', because I thought it would be made in a different way, but it was made differently. But I won't blame the director for it because everyone is equally responsible," said the actor.

Recently Saif Ali Khan described his stint in "Humshakals" as a "mistake", while his co-actor Bipasha Basu has declared that she will never work with Sajid again.

But the failure of "Humshakals" had no repercussion on Ajay and Sajid's friendship.

"If the film didn't work that does not mean we won't remain friends. We are very good friends even now," said Ajay when asked about his bonding with Sajid post the failure of "Himmatwala", a remake of 1983 Jeetendra and Sridevi starrer.

"I have known Sajid since college days... What is important is that you have a friendship that goes on."

More than directors, actors should give priority to script.

"I think most important is the script. When a director narrates the script, there comes an understanding and you know you will be able to pull it off," said Ajay, adding that with each new film actors want to push the bar for themselves.

"You should go one step ahead of what you have done in the past," he said.

He also clarifies that failures do no cast a shadow on the career of established actors.

"We have crossed that stage where we think that if one film of ours flops, we will stop getting work because we have been here for about 25 years. Hits and flops are there in everybody's life. But, yes, for yourself, you want to push the bar."

His association with Sajid may not have been fruitful, but Shetty and Ajay's team have churned out maximum hits, including "Golmaal - Fun Unlimited" franchise.

Talking about their camaraderie, Ajay said: "It's been 25 years with Rohit. It's very difficult to say how our friendship has evolved, but I would like to say he has grown and worked hard. He is one of the most hardworking directors I have ever worked with and he knows his job fabulously."

Also, "Singham Returns" is not a remake, says Ajay and adds that the film's theme is fresh and "topical".

"We have involved a lot of youths and women in the film. Women will be inspired by the film," he said.