View Profile
Saif Ali Khan has turned action king for his forthcoming Tips film 'Race'. It is a known fact that actors have been using 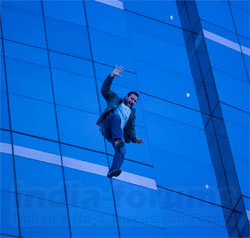 Featured Video
body doubles for doing complicated and dangerous stunts, but Saif has refused to do so.

'Race' is an action film directed by the director duo Abbas–Mustan. According to Abbas–Mustan, "Being an action film, 'Race' has many dangerous stunts and all the stunts had to be shot in such a way that it looked dangerous as well as real. In one of the scenes Saif had to jump down from a 22-storied building and he refused to use a body double for the scene when we suggested for one. He wanted to do the scene himself.”

Though Saif was tied to a harness, it was very dangerous as it was not a child's play to jump down from a 22-storied building. Producer Ramesh Taurani says, "We are really thankful to Saif for doing such stunts for the film. He did this not just once, but thrice just to okay the shot. Everybody on the sets would get frightened and our hearts would stop beating each time he leaped from the height."

All the necessary precautions were taken while shooting the scenes. A doctor and an ambulance were kept ready on the sets as a part of precautionary measures. Hats off to Saif for being so courageous and performing such difficult stunts! We really salute you, Saif!! -(SAMPURN)