Ekta Kapoor, famous for using her serials as a launch pad for new faces in the television industry, continues with the trend as she introduces yet another fresh face in her latest show, Kis Desh Mein Hai Meraa Dil, a love story on Star Plus. The lead role of Heer will be played by Additi Gupta. The Telly Buzz team talks to the 19 year old about her new role and career choice. 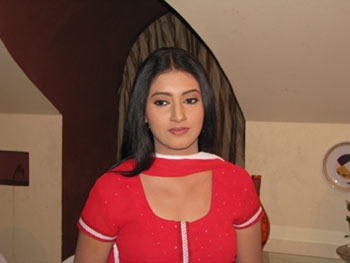 Featured Video
Speaking about her back-ground Additi says, “I am basically from . I am doing my second year in fashion designing at . I have an elder brother who is an IITian and working in Noida.”


So what made a fashion designer get into the television industry? “Acting was never on mind as a career option. In fact, I myself don’t know how I bagged the role for this show. Balaji was having auditions in Pune and I just decided to go for them. I was quite surprised that I got selected. But I was very happy to get an opportunity to start my acting career with such a great show and production house”, replies an exuberant Additi.

Additi is making her debut in television with the daily-soap queen. How was the experience working with ‘The Ekta Kapoor’? “Well actually I’ve met Ektaji for the first time today. Although I am a little apprehensive working with her, but she is very understanding and helpful.” Giving us an insight about her character Additi says, “My character in Kis Desh Mein.. is that of a very simple girl. She is a very down to earth girl and is a silent spectator to everything happening around her. My parents have already arranged my wedding. But there are a lot of misunderstandings between me and the person I am supposed to get married to, due to which there is a twist in the serial. But I am not at liberty to divulge anything about that right now.”

On a final note, speaking about her future plans Additi says, “I have taken a year’s break from my studies. I would definitely like to move further in this industry, but I will also continue with my studies as and when time permits.”

We sure hope Additi rocks the tele-world and hope to see more of her in the future.

11 years ago Additi we miss our cutie pie Heer and cute Pihu +her attitude :((((( love you so much! You are an amazing star and an amazingly talented actress!!
Can't wait to watch u rock the screen again !!!!

+ 3
11 years ago Please come back soon with Harshad Chopra, we are missing you guys badly!!!

+ 4
11 years ago Wishing you all the best on this new project!

May you continue to receive great success!

+ 3
13 years ago hehe the show rocks and is the best show ever!!...additi rocked too much and harshad did too....prem and heer are the best jodi ever!!