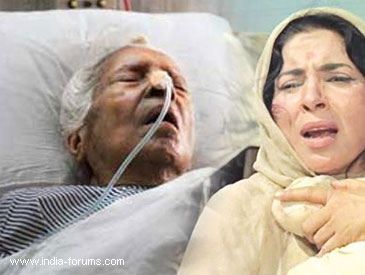 Bollywood's quintessential on-screen mother Achala Sachdev, bed ridden for the last six months, has passed away in a hospital here, her physician said Monday. She was 91.

'Achala Sachdev expired yesterday (Sunday) at 5.30 in the evening at the Poona Hospital. We immediately informed her son who is in the US. He will be reaching Pune tomorrow (Tuesday),' Vinod Shah, who was treating the actress in Poona Hospital, told IANS.

'Achala Sachdev had broken her left leg after a fall in her house six months ago. She also suffered a brain infarction in which she lost her vision and movements of upper and lower limbs,' added Shah.

Her funeral will take place Tuesday evening at Vaikunth here after her son Jyotin arrives from the US.

The actress, known for her role in 1965 film 'Waqt', where she was part of the legendary song 'Ae meri zohra jabeen', underwent surgery 15 days ago and since then was being fed liquids.

'She underwent a surgery 15 days ago. We had put a feeding tube into her stomach so that she could be given liquid feeds and proteins directly,' said Shah.

The actress, who had acted in over 250 films, has donated her fortune to various organisations.

'She has donated all her money to various organizations. She donated Rs.20 lakh and gifted her sprawling 2 BHK apartment in Pune Camp to Janaseva Foundation,' said the doctor.

She has been part of the industry for more than seven decades. Achala Sachdev made her film debut with the 1938 movie 'Fashionable Wife' and acted in over 250 Hindi films including 'Nine Hours to Rama', 'The Householder', 'Bandhan', 'Meri Surat Teri Aankhen', 'Kora Kagaz', 'Haqeeqat', 'Mera Naam Joker', 'Julie' and 'Dilwale Dulhania Le Jayenge'.

After marrying British businessman Clifford Douglas Peters, who had a factory in Bhosari, she moved to Pune.