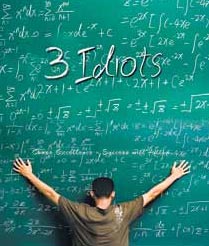 After ‘Hello’ another movie to be based upon Chetan Bhagat’s novel is Rajkumar Hirani’s ‘3 Idiot’. It is based on the novel ‘Five Point Someone’. Abhijat Joshi and Raju Hirani have written the screenplay and the lyrics are by Swanand Kirkire. Shantanu Moitra is composing the music for the film.
The producer of the film, Vidhu Vinod Chopra has convinced Aamir Khan to do this film. This will be Aamir’s  next release after ‘Ghajini’.
The film has an amazing star-cast starring Aamir Khan as Ryan, Kareena Kapoor as Neha Kurein, Sharman Joshi as Alok, Madhavan as Hari and Boman Irani as Professor Kurein.
Ryan, is a handsome and adventurous young man who loves his friends more than anything else. He hates being a book worm like other of his college mates, so always end up getting low grades in college exams. He is a guy who believes  doing things in his own way and finally he ends up with five pointers as his GPA.
Alok is a simple guy, who aspire to get good grades so that he can earn money and overcome poverty of his family.
Hari, a shy guy who wishes to be as handsome as Ryan. He is average at studies and at times bad or funny in expressing his feelings. He falls in love with Neha Kurein (Professor’s daughter). He always get messed up in his attempts to impress Professor Kurein

The shoot of the film has already begun at Shimla, Ladakh, Delhi, Bangalore and Mumbai. The shoot is supposed to be over by December though release dates are  not confirmed yet.