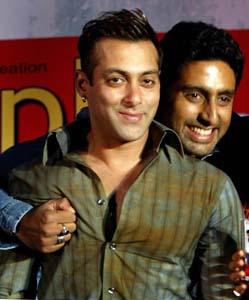 Abhishek Bachchan and Salman Khan, two of the biggest names in Bollywood have finally decided to put an end to their mutual hatred. Believe it or not, from what we hear, Abhishek has extended a hand of friendship to Salman by defending him on a popular social networking site.

Courtesy Aish, who was Salman's ex, and is current Mrs. Abhishek Bachchan, Abhi and Salman have shared a strained relationship forever. When Salman and Aish were a couple, their affair had been the icing for all gossip circles owing to Salman's possessive attitude for his then lady love. But that is a past put well behind by the junior Bachchan jodi!

Burying the hatchet was Abhishek Bachchan, in defending Salman against a derogatory remark from an addled journalist which stated as a fact how big league stars did not sell undergarments. While macho Khan Salman paid no heed,  AB in a surprising move of camaraderie chipped in some defending evidence.

He brought in names of those who have done hosiery ads at some point in their careers including A-listers like Akshay Kumar, Shah Rukh Khan and Hrithik Roshan; hence rendering the blatant statement from the journo quite pointless.

Whatever the hassles and the controversy, we see only one big consequence - Abhishek supporting wife Aish's ex-lover publicly. Now we're talking!