Pulses were set roaring when Katrina Kaif and Vipul Shah, the ace director, made their presence felt on the sets of Zee TV Ek Se Badhkar Ek to promote their forthcoming movie, Singh is Kinng. Ahmad Khan pulled Katty on stage to jive with him on the chart busting numbers of Singh is Kinng. So did Aneek Dhar, who also dedicated a song to her from the same movie. 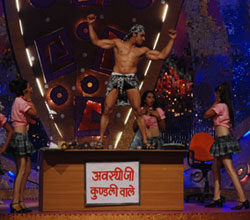 Featured Video
But the man of the moment who surpassed it all was certainly none other than Abhishek Awasthi, who apparently could not contain his happiness on seeing sizzling Kat. The theme was to dance on their favorite jodi number and Abhishek gave a mind blowing performance. He started his performance on the song from Salman Khan's movie, Mujhse Shaadi Karogi, "jeene ke hai chaar din" dressed as a champu but to everybody's surprise suddenly bared it all in front of everyone on the stage. So floored was he after seeing Katrina that he couldn't hold on to his clothes.

“Actually I love Salman and Priyanka's pair besides admiring Salman Khan. So this time I thought of giving a performance on Jeene ke Hai Chaar Din as Salman gave in the movie Mujhse Shaadi karogi. It was always a dream to perform on that song”, says Abhishek when we called him. 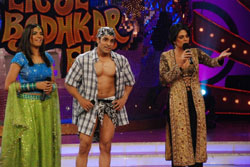 So how did Katrina react to his semi-nude performance? "Katrina praised me and said that Salman gave the performance after many takes but you gave it in a single shot. She also applauded my courage to go bare on stage," said a thrilled Abhishek. Ahmed Khan, the judge of the show also showered praise on Abhishek, "One really has to have a perfect body to give such a performance and you did full justice to it."

This out of the blue strip tease act of his took not only Katrina but everybody off guard. Clad in just underwear and a tiny sarong clinging to his waist (not to forget the six pack abs), the guy trying to ape Sallu bhai simply rocked the stage and earned lots of cheers and applause.

Our sources also informed that, "Abhishek has scored full 10 on 10 for his mind blowing performance".

Well it is said that hard work always pays and it holds so true in case of Abhishek!!

14 years ago i still don't like her. vidya deserved the award.

14 years ago Yes! Kareena got award since there was no compition this year. She is not good actor at all. I think she got the award since she is now Kha's GF. And SRK bought the entire Film fare award.

14 years ago she doesn't suit being pencil thin she looked better just being toned and slim like in k3g. and as for the awards she is only winnign because there was no good competition for her this year had there been better rani or preity movies or ash thn kareena wld never hve won. also karishma is much better looking then bebo and has a much better body as shes slim nt stick thin and looks much younger thn kareena.

+ 2
14 years ago I think vidya deserved the filmfare for Bhool bhulaiya better....but then again thats just me! OH well!

+ 2
14 years ago yayy!! thnx fr the article!! i really admire her!! she truly deserves all these winning titles as wht she portrays on screen is natural beauty; not 50 plastic surgeries like her sister and Ash Rai Bachan!!

+ 4
14 years ago definitely agree wih you laney.. Kareena really deserved the awards she was recipient for.. her role as Geet in Jab We Met for fantastic...!

look forward to seeing her in tashan and her forthcoming films this year!

thanks once again for the article!

14 years ago yeah she actually deserved the awards

thanks for the article :)

Hmm, Abhishek doesn't look good ! LMAO, he should put his shirt back on (Y) Hahaha!