Jiah Khan, who thinks in English, got into trouble when she was asked to deliver lengthy emotional Urdu dialogues for 'Ghajini' in sync sound, but says that her co-star Aamir Khan bailed her out. 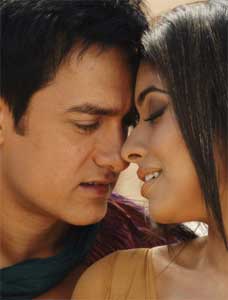 Featured Video
'I must admit it was a bit of a problem. Aamir and the director got me an Urdu dialogue coach, Athar Nawaz who guided me. And each time I'd be stuck with a line Aamir helped me out,' Jiah told IANS.

'My mom, who lives in London, flew down during the shooting. She speaks Urdu fluently. She ran through the dialogues with me over and over again. I think I've done my lines very well. To have my lines dubbed would have taken away from my performance. I think I managed my lines well,' she added.

'Like the Urdu-Hindi, I've mastered the dancing to a large extent,' she said.

'I realised how hard it is to do a sizzling song. The song is a very Jennifer Lopez kind of number. It's very stylish and chic. In a week's time, it goes on air. That should answer the question why I'm not seen in the publicity,' she said.