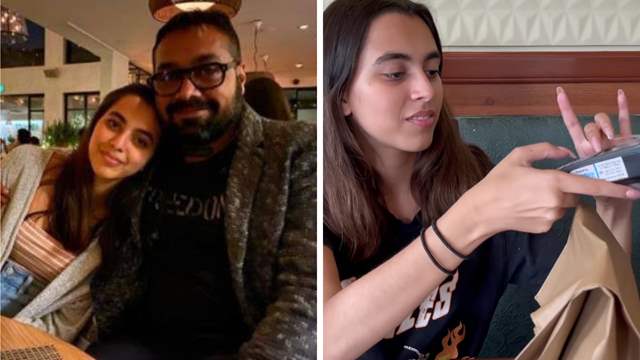 Filmmaker Anurag Kashyap is a proud father today as his daughter Aaliyah Kashyap is now all grown up. Aaliyah took her dad out for lunch and even paid for it with her very first income, that she earned from her YouTube channel.

Anurag wanted to keep a record of this precious moment and he took to his Instagram handle to share a video while his daughter Aaliyah Kashyap paid for their lunch. The father-daughter enjoyed a happy lunch today at a Mumbai restaurant.

“So My daughter @aaliyahkashyap took me out for lunch after a long morning and paid for it from her own @youtube income ..it’s a first so worth keeping a record.”

Aaliyah Kashyap has a popular fan following on YouTube and owns a channel wherein she talks about her personal life, her relationship with boyfriend Shane and her parents.

Currently, Aaliyah and Shane are in Mumbai and living at Anurag Kashyap’s house.

Recently, Aaliyah Kashyap, who is already an Internet sensation celebrated her one year anniversary with boyfriend Shane Gregoire by sharing a video montage on her Instagram handle.

Anurag Kashyap’s daughter Aaliyah reacts to #MeToo allegations on him: ...