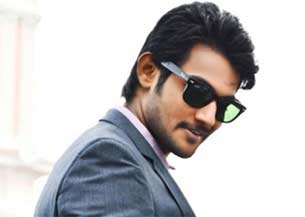 Actor Aadi Pudipeddi, who is awaiting the release of romantic-comedy "Pyaar Mein Padipoyane", says he agreed to work with director Ravi Chavali because he gave his father Sai Kumar a much needed makeover in 2006 Telugu film "Samanyudu".

Sai Kumar won Nandi award as well as a Filmfare award for his role in the film.

Aadi says he's trying his hand comedy in the film.

"All my films so far had comedy in a few scenes. The scope for comedy in this film is higher. I have tried full-length comedy for the first time. I was little nervous about doing comedy, but Ravi made me believe that I could pull it off," he said.

The film, which also features Shanvi Srivastav in the lead, is slated to release around end of April.