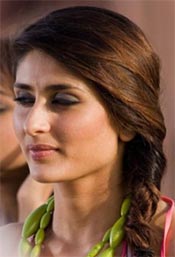 It was revealed that Kareena Kapoor's character in Golmaal Returns is called Ekta, and not surprisingly, she plays a fan of saas-bahu serials!

Now Kareena has taken her fondness for Ekta to the next level by deciding to hold a special screening for the television czarina next week once the prints are out. Ekta is also said to be keen to have the director of Golmaal Returns, Rohit Shetty, direct the much-awaited sequel of Kya Kool Hain Hum.

Golmaal Returns was cleared on Friday by the Indian censors with a 'U' certificate and no cuts.

Kareena's special screening will be attended by her friends Lovely Singh (who gave her It's Rocking), sister Karisma Kapoor and Saif Ali Khan, among others.

Golmaal Returns is out in cinemas on Wednesday 29th October. It is an Indian Films - Studio 18 worldwide release.
Featured Video