View Profile
Innovative movie marketing has become the order of the day. Movies  are finding newer ways to 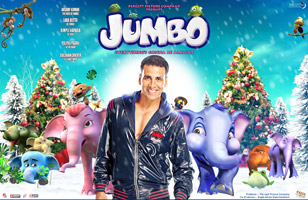 Featured Video
reach out their target audience and ‘Jumbo’ the animated movie from Percept Picture company has pulled out a coup by tying up with Podar Jumbo Kids, the pre-school arm of Podar Education Network in Hosting a series of Puppet show themed on the Akshay Kumar starrer Jumbo.


Present on the occasion were television actress Surveen Chawla who is also doing three movies with Percept Picture Company.


Child actress Rushita Pandya , the face of several television commercial and last seen in supernatural thriller ‘Gauri’ the unborn were also present to enjoy the show.


Surveen  Chawla, who thoroughly enjoyed the Puppet show said that “Animation films have a huge market in India and abroad and I am sure that Jumbo will be huge success. Also puppet show as an art form needs to revived and I hope Ms. Swati Popat takes initiative on the same.”