Amit Paul, the Indian Idol finalist could not take the stage of K for Kishore for the Challenger Contest, owing to his illness. This created a rift on stage as the new challengers demanded that Amit’s name be taken off the contest. Though the popular singer got enough support from the 6 finalists of K for Kishore who opined that Amit Paul had proved his caliber on the same stage before and hence should be given another chance, Amit Kumar felt that as per the rule, Amit Paul should not be given a second chance. There was more tension on the sets of K for Kishore when Bappi da refused to accept Amit Kumar’s stance, as he declared that Amit Paul has time and again proved his talent to the world and the K for Kishore platform should not miss a great singer like him. The third judge of the show, Sudesh Bhonsle tried to strike a balance and said that, though he agrees to Amit Kumar’s reasoning, he cannot deny the fact put down by Bappi Da.

Now, what is the final outcome of this conflict? Will the new challengers see the back of Amit Paul and rejoice over his exit? Or will the judges arrive at a decision to give the talented Amit Paul a ‘golden’ chance to prove his talent yet again?

Catch all the drama in K for Kishore on Saturday at 9 PM on Sony Entertainment Television.. 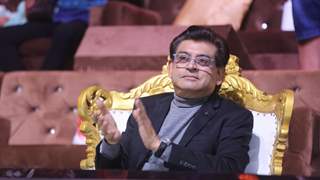 chitrawan7 13 years ago i just want to see him n listen his voice on this show...

+ 3
13 years ago HOPE AMIT GETS A CHANCE..he is indeed talented.

13 years ago and I was looking forward to hearing Amit on the show today.

+ 5
13 years ago Amit is the best and the i only watched that episodes he's on..GET

13 years ago i would definitely love to see amit on the show. i'm sure there are other people like me out there who'd watch the show just for him.

13 years ago I hope Amit is able to participate, really want to see him singing and performing again!

+ 3
13 years ago Uhh..drama taking place everywhere! But I seriously hope they give Amit Paul a chance!!!