Be prepared for a major shock this Friday on Jjhoom . One of the better singer of this Sahara One reality show, Apara Mehta has been voted out. The controversial elimination procedure which everybody has been talking about, has taken it first unfortunate victim. 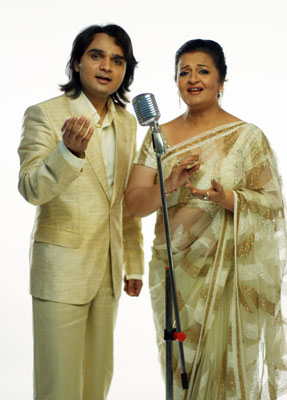 Featured Video
Here the combined judges and audience vote only save the top 3 jodis. Then the remaining seven start saving one jodi until the last one is left in the cold A source says that in the end, Apara and Shweta Tiwari were left in the fray and the Kasauti lead got saved.

Apara was disturbed at being eliminated despite singing so well. ï¿½This just goes to show that the remaining contestants were scared of tough competition, hence they threw me out." She blamed the format for bringing out the worst in human nature. "I request the public not to waste sms money, for any way you have no say in the elimination..." she added.

Roshni Chopra one of the other contestants, felt very sad at the whole drama: ï¿½It left a very sour taste in my mouthï¿½. She further added that if it were in my hand, I would surely bring Apara ji back.

Anchor Sucheta also was not happy at the format but said that once you are in the game, you have to go with the flow, good or bad.

14 years ago OMG sooo much politics this is dirty politics and it suks.. straight up ..

+ 3
14 years ago thats so shocking! she got the heighest marks in the first epi n now she is eliminated..strange!

+ 2
14 years ago well datz bad and sad... but newayz which show is rahul vaidya anchorin? i thot it waz jhoom india :~

+ 3
14 years ago This is so sad.. I guess she has been eliminated by the other jodi's just because of the fear of loosing to her!!

14 years ago thats sooo sad :( I have nothing to say but I just want to say somthing to the viewers.........think twice b4 you vote

14 years ago I don't get it, when the other reality shows have only the audience voting people out, then everyone is bad because they don't vote on talent. And now that they changed the format, so the audience doesn't make the wrong decision, everyone still doesn't like it.... I simply don't get it!

14 years ago the show has not even started in US and already an Elimination..GRRRR