If a rise in reality TV shows and longer running shows adding another year to their innings marked 2007 then 2008 will possibly see more channels adding to the existing ones. First to take off is Sameer Nair's NDTV Imagine. The buzz is strong and the line up is impressive, not to forget the goodwill and reputation NDTV head honcho Prannoy Roy and Nair enjoy in the industry. Surely, a winning recipe for success! 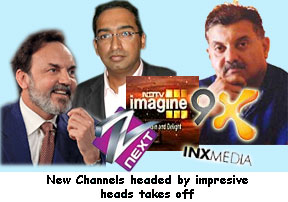 Featured Video
Indrani and Peter Mukerjea's baby 9X had a tepid start late last year but then in the game of TRPs one can never predict what will do the trick in 2008. Siddhartha Basu's first attempt at fiction, Kahin Jiya Jale, has reportedly fetched good ratings. Hopefully, it will continue its good run. Begum, the catty late night chat show should also do well to the channel's fortunes.

Zee Next, Zee's youngest and newest sibling has some interesting concepts in the form of shows like Simplly Sapne and Pyar, Ishq Aur Mohabbat and Yahan Ke Hum Sikander though one wonders if the viewers would really take to these shows. After all, the present TV scenario is like an embarrassment of riches. Too many channels and no one to watch! 2008 might see a shakeout of channels thereby separating the men from the boys.

The controversies plaguing the victories of Prachi Desai and Sanjeeda-Aamir Ali in Jhalak Dikhhla Jaa (JDJ) and Nach Baliye 3 respectively, have left a bitter taste in the mouth of reality show makers and the audiences alike. We won't be surprised if the third season of JDJ will have a clause for contestants: 'No prime time bahu allowed participating' while Nach Baliye makers will make it mandatory for every contestant sign a clause which states: "I won't leave the stage in a huff after losing, and I will not play spoilsport'. Meanwhile, we won't be surprised if the contestants too make a Godfather-like demand: 'Show me the votes'. 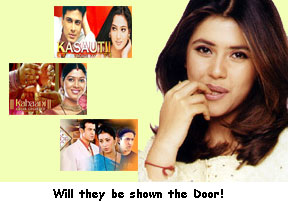 Will 2008 show us the three golden oldies of TV – Kyunki Saas bhi Kabhi Bahu Thi, Kahani Ghar Ghar Kii and Kasauti Ziindagi Kay – die a natural death? May God give Ekta Kapoor the good sense of giving them a decent burial! Now don’t get surprised to see the K-soap queen Ekta Kapoor jump into the reality TV fray in 2008. Shudders!! Given her track record of creating melodramatic moments, wonder what she will do to make her reality shows work. Reality and 'reel'ity, viewers won't be able to say one from the other. 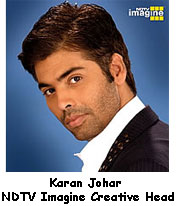 Shah Rukh Khan will return with his second stint with Kaun Banega Crorepati (yawn). It will be interesting to see how King Khan manages to rub off his box office charisma to the flagging show which will be now minus Sameer Nair's creative acumen. Meanwhile Karan Johar will take his creative expertise to NDTV Imagine. The producer-director-cum-talk-show-host has already bagged a few awards for his contribution to TV…his role as a creative consultant in the new channel will be keenly looked forward to.

Zee is gnawing at Star TV's Number 1 position. If Saat Phere, Sa Re Ga Ma Pa and Dulhann have turned around Zee's fortunes, Star seems to have marched ahead with shows like Bidaai and their old TRP crunchers, Kyunki, Kahani and Kasautii. 2008 should see the war hotting up as Star pulls up its socks by wrapping up Kasauti Zindagi Kay and introducing newer concepts like a game show, called Kaho Naa Yaar Hai played by celebrity jodis with Karan 'Nach Baliye 3' Patel hosting it. 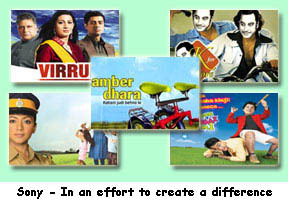 2007 saw Sony walking a different path yet again with shows like Virrudh, Amber Dhara and Salaam Zindgi. While Virrudh will say alvida soon, Amber Dhara has slumped after a promising start, and it's too early to record the impact of Salaam Zindgi. But the channel needs to be given its due for at least trying and making that effort to create 'different' shows. What's more, K for Kishore, Chalbaaz Champion and Ekta Kapoor's first tryst with reality TV should see Sony catching up with its rivals.

All in all, 2008 should hopefully see more varied content, more risks taken by production houses and solid backing by channels of the same. It should also see good actors like Smriti Iraani, Sakshi Tanwar, Shweta Tiwari, Kiran Karmarkar, Ram Kapoor, Achint Kaur, Anoop Soni, Ali Asgar, Harsh Chaya and many more, break away from the humdrum and attempting to do newer things.


While Smriti has already cemented her position as producer, it would be heartening to see other talented actors to bend some rules and rewrite new ones. Would also love to see Renuka Shahane do an encore, make a comeback yet again, Mona Singh destroying her goody two shoes image, Prachi Desai do some daringly different, Gautami Gadgil Kapoor to shed off her Tulsi garb and do something more suitable to her age, Shefali Shah to return to TV, ditto Sandhya Mridul, Sushant Singh to be given one more chance to show off his acting skills, more people like Rakhi Sawant to expose the farce behind reality shows but with dignity and self respect. The list is endless. Hope, TV gives its actors their due this New Year.

14 years ago An excellent article. I'm glad it has acknowledged Sony's courage to try new concepts.

Jaya, if i'm wrong Ravi Rai did a serial called Kashish for Zee two years ago....it starred Simone Singh and Ayub KHan...sadly, it was pulled off air due to low TRPs.

Thanks for the lovely article.

14 years ago I heard before that Big Boss will be back on Sony????

I would most definitely want to see the return of Ravi Rai to the small screen... This master craftsman has given us some most sensitive dramas on TV like Sparsh, Imtihaan, Teacher, Sailaab etc and all of these had been very popular as well in the pre saas-bahu days...

Wonder where this golden man has vanished.. We need more of him to revive the sinking ship of serials!