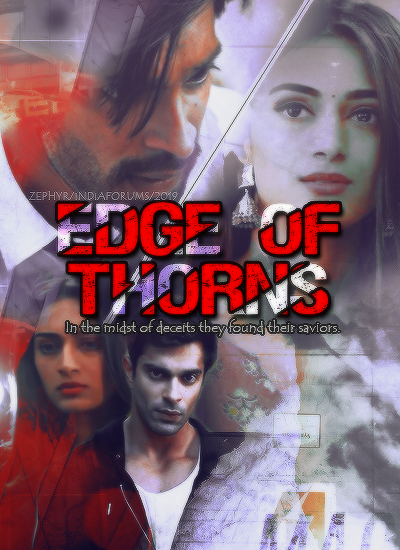 :Chapter One : The Lonely Damsel:

"The thing that irks me most is this shattered prison, after all. I'm tired, tired of being enclosed here. I'm wearying to escape into that glorious world, and to be always there: not seeing it dimly through tears, and yearning for it through the walls of an aching heart, but really with it, and in it."

The strong odour of the kahva filled up her nostrils as she sipped the liquid intently while looking out of the window at the meaningless motions of trees. She clutched her shawl closer to herself and wrapped herself in the cocoon of her own arms. The cold had started to get deadly since a week and there seemed a bit of a drug in the zephyr of Kashmir that represented tranquillity.

She'd been alone for so long now that it almost seemed stupid to get out and have fun. Eight years ago when she'd married to her husband she was 19, it was impulsive and she regrets it to this day. How life would have been if she'd stuck to her 'No' of an answer rather than swimming gut deep into his charming and chivalrous tactics. She'd gone ahead picked up a way out of her melancholic life and taken up a rope to get out of the quicksand that he was.

She still remembered the day her Amma and Papa died in that horrible accident. They'd been on a trip to Nishat baagh when they'd hit a hill and gone down the cliff, their bodies had been found one month later in a pathetic condition and she was taken to her grandmother as she had been a  minor. When she turned 18 her Grandmother had suffered an unknown illness,due to lack of funds she couldn't be provided for and died almost immediately leaving a shattered little girl behind.

She'd gotten in a college on the availability of scholarship and met HIM. He'd charmed her to an immeasurable extent, she'd fallen for him hook,line and sinker. An impulsive mind is deadly and she had invited her own hell to herself. The man of 22 had left her after spending a night of passion.He left behind a sorry corpse of a human being. She'd been a mess for long, too long and searched door to door for her husband but got nothing in return. She had even filed a complaint but lack of evidence had closed the files very quickly.

And now after whole eight years of drowning within the waters of her own demons she sat here pacifying herself that he didn't deceive her he's in some danger. He couldn't ever deceive her but there was a bit of a part of her that knew the truth. He was never coming back. Ever.

As the time went by she learned to live with it. She knew her life will never be a frabjous journey it will always have thorns but at the end of the day every woman wants a strong pair of arms that securely hold her at place after she had fought with wolves the entire day and she didn't have them. She often thought what more amount of hard luck was left in her existence and what possibly she had that could be taken away. Sometimes she wondered what else can go wrong, what else can be a downhill she was left with nothing but a bit of dignity and she prayed every God damn day of her remaining life that she didn't have to part ways with it. No matter what the situation is.

She got up from the wooden chair that she was sitting on and dumped the cup in the kitchen sink. Her hand automatically went to a book kept on the dinner table just outside the kitchen. She picked up and read the quote she'd underlined as a child 'To the person in the bell jar, blank and stopped as a dead baby, the world itself is a bad dream.' She'd loved the writer instantly and the book was one of her favourites. How easily it described the pain that she felt,  the pain that didn't even let you go. She loved him, with all her heart and he took it and strangled the mismatched nerves of the object for his satisfaction, leaving a corpse behind.

She re-wrapped her shawl on herself and hugged her arms together feeling the extreme chill that coursed through her spine. She had been working in a small start up company since five years after he had left her, trying to think what would have happened if she'd been more careful with herself and thought about the consequences that her actions were about to bring in near future.

She was about to get up and retire to bed for the remainder of the night when the shrill ringing of the landline caught her ears. Groaning visibly she sighed and got up, dragging he uncovered, bare feet through the path she rushed to the living room to pick up the receiver. She clutched the device in her cold hands and placed it on her ear.

"Hel-loh? " She asked in a polite manner and waited for the person to speak.

" Hello?! Am I speaking to Mrs. Prerna  Basu?" The voice on the other side of the line was excruciatingly manly and hoarse. For a moment she felt her cheeks cluster up a strong red hue but overcame it immediately.

"I'm Prerna Sharma." She stated blankly thinking who knew about the surname of her missing husband.

"Ms Sharma this is the head investigative officer of Kashmir Police special branch. I want to ask you for an immediate appointment on a subject that needs my attention. I'd like to meet you as soon as possible so as to have a word with you in person, of course." his authoritative voice shook the walls of her eardrums and she shivered within herself from the cold or the effect of his voice that was unanswerable.

"Y-Yes I'll be m-more th-than glad to help. I could clear anything I have and meet you at whatever time y-you wish." She had started stammering because of the ruckus thudding of her heart. This call meant a possibility that HE was found or maybe can never be found.

"Then I'd like to schedule an appointment with you on 19th of this December. Is that fine by you? I'll reach there in three days after completing my other engagements." He stated ever so nicely causing her to sigh audibly.

"Is this related to my Husband?!" She questioned back not being able to resist the urge anymore.

"I'm afraid it is. And I wouldn't- couldn't say more over phone.Sorry." He instantly dropped off the receiver and hung up on her while she stood there in a daze trying to recover from the interaction just occurred.

She knew the day would come when she'll get face to face with the reality of his betrayal and had hoped numerous times that he hadn't betrayed her intentionally, that he had been stuck somewhere else so as to not break the shackles of her trust. Sighing deeply she leaned back on the headboard of her bed thinking what more bad luck her existence had to offer her now and closed her eyes to vanish into her own world of peace and tranquillity.

Edited by EuphoricDamsel. - 10 months ago
35 Likes this

Hello To each and every member of the Kasauti Forum. I've been a silent reader over the forum and have been watching the show on, on-and-off basis since it started off. I was a kid when Kasauti - 1 aired on Television and this new take over the show has intrigued me ever since.

Parth,Eria and of course our beloved KSG have been doing a wonderful job altogether and i couldn't be any more stumped. The story which I've started here has been within my mind since forever , I started off with it on SHIVIKA but life got in the way and i couldn't ever complete it or get to the half of it also. I've come around this forum with immense hope that yes this story would be read and cherished the same way as my previous works have been on other forums.

THE STORY HAS NO RELATION WHATSOEVER WITH THE ORIGINAL STORY LINE OF THE SHOW.

This is a totally different concept with a genre that is suspense/thriller with of course romance in the way of it as the progress is made.

I do hope you guys like this new concept and give me enough comments and likes to motivate me to go through with it the updates are going to be weekend based.

Rishabh and Prerna do not know each other as of now

Prerna was married to  Anurag after which he disappeared

He's been Missing since after the wedding night

This has a suspense flair to it

PM list would be made in accordance to the response

Depending upon the response the story will be continued or deleted

Also I posted this Story as an AnuPre SS yesterday but after getting messages from almost each person I Pmed I decided to convert it into a PreRish Fiction. I know a couple inspires you to write or not but for me as a writer my story and the reader's response to it matters the most to me. So it doesn't matter which couple i choose to go ahead with I'd really wish you all forum members give this story a chance because it has a lot of potential.

Edited by EuphoricDamsel. - 10 months ago
16 Likes this

Chapter One : The Lonely Damsel

Edited by EuphoricDamsel. - 10 months ago
5 Likes this

Edited by EuphoricDamsel. - 10 months ago
16 Likes this

The story seems promising. I dont read too many long AnuPre here... Umm, i have just started to read and I have to really dig in for AnuPre stories. I read on wattpad though but ofcourse not all stories keep me hooked.

The concept is intetesting and I will be following it as long as possible. Tue description is worth reading. Kudos.

The story seems promising. I dont read too many long AnuPre here... Umm, i have just started to read and I have to really dig in for AnuPre stories. I read on wattpad though but ofcourse not all stories keep me hooked.

The concept is intetesting and I will be following it as long as possible. Tue description is worth reading. Kudos.

I'll try to keep up your interest .