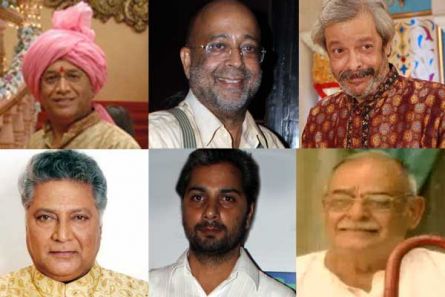 Mostly all TV soaps have an ensemble of different characters 'father, mother, brother, sister, uncle, aunt, niece, nephew, mother-in-law, father-in-law, etc, etc. If the serial is well etched each character has a definite role to play. And if it's not, then often you end up with characters who are either bumped off as the story progresses or are side lined ( sent abroad, sent to jail, etc) as they didn't have any thing to do with the story anyways.

Currently, if you have observed, almost all the fathers in soaps are going through a 'rough' patch. Looks like the kundalis of all TV daddies read the same ' 'jinxed'. Let's begin with Manav's dad in Pavitra Rishta. An alcoholic, the old man right from the start of the serial has always appeared as though he may kick the bucket any minute. Either he miraculously survives some train accident or he is always spitting blood and probably has cancer. Why can't the makers of the show once and for all give the man a new lease of life or give him a decent 'burial'?

We now move to a show which revolves around the pitaah'Maan rahe tera pitaah. In here one thought the dad was the central character and that the old man would be left at peace. But here too we have the villain played by Varun Badola who is incidentally the pitaahs' brother, who is trying his best to do him in.

Then there is a new one, where daddy dearest may soon make an exit. Vikram Gokhale playing 'Pitaji' in Mera Naam Karegi Roshan. He plays Reet's father in the serial and we know that he is there only for a short span of time.

And as I run from serial to serial to find a happy father I come across the worst case of father gone wrong in Agle Janam'Achyut Podar who plays father to Sudesh Berry (Loha Singh) is such a sad case that your heart goes to the old man as all he does is lament the birth of his 'evil' son. With no quality scenes or good lines to speak absolutely no justice is done to the old patriarch in this one.

But I save the worst for the last'Sriti Jha's dad in Raktasambandh. The blind girl (Sriti) has a nightmare of her father hanging himself on the day of her marriage. Though it is but a bad dream the promo suggests otherwise. For this one we shall reserve our comments as the show launched only last night.

It is indeed a mystery how all 'dad' roles are going awry at the same point of time. Why are all fathers in all soaps ailing at the same time? One is aware that there was a time when a single writer wrote the scripts of all the shows of a particular production house. So one couldn't but sympathise with the writer as how imaginative could one get? But since all the above mentioned shows have different writers the logic behind all dads ailing at the same time defies logic

there are so many kinds of dads. most of them seem dsyfunctional with so many problems that they can't even manage their families...sounds like the women are doing more to manage the care of the family. the negative image of dads is not very helpful to them.....