Chapter 8: Asking For An Acceptance!

Asking For An Acceptance!

The sky is thick with clouds, the riverbank is dark with the tall trees.

A wounded heart will heal in time and when it does, the memories and love of the distanced one will be sealed inside it to comfort the aching heart! There has not been a single day that Radha has not waited for Him. With every breath that she has drawn, she has taken His name.

"What a sublime peace suffuses this evening  Krishna! When doves murmured on boughs and breeze sighed in sprigs, if waves gurgled in the pond and distant woodwind sounded musical, thinking you arrived, hearing only your call! I looked all around with brimming eyes. Don't leave me anymore Krishna, even for a moment, lest this exultant heart will break!"

The cowherd maidens are watching her with suppressed smiles. It's an everyday ritual for them. The flowing water, the swaying waves, the moving breeze with the burden of those floral fragrances, all know her pain and longing for her Krishna!"

" Krishna, your thoughts are paving the stairway to the stars, celestial light beckons me when I see you in front of me, though it is illusory!  Is the sky not an illusion but it consists of many stars, the Sun and the Moon, and many clouds in it?  !In the same way, I can see you nearer to me, can gaze your smiles as twinkling stars, can feel your association as a soothing moonlight, can imagine your valor as fierce as a midday Sun's  bright rays, Krishna  come to your Radha  walking on the path of clouds, or at least smile at me from those  glistening  river's gentle ripples!"--

Radha sat there under the tree on the river bank seeking peace in solitude. She realized that her Krishna is a king now with many worldly responsibilities, she heard the stories of his association with the Hasthinapur princes, the Pandavas, and their changing status day by day. Meanwhile, Krishna fought many battles and expanded the territory of his kingdom. Shifted his base from Mathura to Dwaraka.  He was the guiding force to the Yadava clan now ... .shown his opulence to the Mathura and Dwaraka people.

"It was very vivid to my mind Krishna, still I remembered that evening's conversation with you while swaying on that floral creeper's swing!  When I was watching your image on the gyrating wavelets of River Yamuna, you suddenly asked me "Radha, let us marry... now itself, under the moon and stars as witnesses," with a garland in your hands! Your words rendered me speechless !--She was reliving that moment!

"All of a sudden why this idea touched your heart my little  Krishna?" With a fond smile, she asked him!

He wanted to remind her of their eternal oneness at that moment! Krishna explained to her today!

"I've attended a marriage in our village when I asked why they are marrying?  Dada told me if they marry, then they will be able to live together forever, will be able to meet the requirements of each other! " Forever? I questioned, he assured me --, "yes Krishna forever!  Radha... let us marry and live for each other forever!"

Radha is trying hard to hide her titters, but it is spilling out from the corner of her lips, from the blink of her eyes like a sparkling star's twinkle on the mirror!

"Ohh ... my dear eternal lover, what to say! It is not acceptable to this world! Society will never accept our out of world relationship! They will demean me, I am already married and living with my family in my house."

"Why is it not acceptable Radha? See, Shiva has two wives, Parvathi and Ganga, I heard that story from Maa. And Ayodhya King Dasarath had 3 wives. Don't you know those stories?  If a man can have many wives, then why can't  a woman have many husbands!"-- A childish desire in his words, but it's a prophet's defining moment!

She caressed his hair and kissed him on the forehead. Then with a smile tried to explain --- "It is acceptable only to male Gods and mighty Kings! Not to a cowherd girl like your Radha"!

An undefinable aesthetic ecstasy--although, their relationship is neither amorous nor clandestine but astral and pure divine love which does not require any legal stamp to tie them in with matrimonial rituals!

Cultural restraint has its tales of wisdom and morality. Radha tried to make him realize the prevailing norms at that time ---

"You are a God to us as our savior Krishna, and the sovereign of this entire universe, a ruler of our hearts! A woman is allowed to marry only one person in her lifetime. So I can't marry you, my dear infinite lover! "

Like the wavering light from the wick in its saucer of oil, the moonlight fell on his face making him look as somber and serious as it always was.

If a man can love many women, why can't a woman do the same? That is this Kid's question --- Radha witnessed a determined Krishna sat near her, who is redefining many societal norms since his childhood in a sagacious manner, trying to curb many retrograde rules which are prevalent at that time. Today he wants to get clarification from his Radha.. still he was in an arguing mood!

Is he asking for my acceptance or searching for truth in a woman's heart about his unacceptable decision? Radha slipped into deep thoughts!  It's a process of social evolution .since society is a living unit undergoing a constant change, it has to evolve according to that Yug Dharma!

She looked deeply into his eyes, she saw a  resolution there in those deep eyes to give a  new definition to human relationships!

What this kid is going to do or rather define in the future? Is he trying to introduce a new norm, a refreshing society where a woman will get whatever she wants and hold her head high with self-respect, with full freedom?

Is he going to put a new norm in front of mankind, does he want to give free will to the girl to select her partner?--

A seed was planted in the mind of Krishna at that moment. He realized that only a woman can control the aggressive warrior, a mighty man from straying from his duties and Dharma. The delicate silky thread-like love of a woman is more powerful than the jealous rage and envious resentments of a raging man and the desire for domination and the strong longing for suppressing the rivals to win over them. Instead, by making a woman a binding factor in society, she will take care of the interest of not only her man but also the interest of society as a whole! Radha is thinking about the atrociously suppressing status of the women in society and realized that this enthusiastic kid is trying to define new norms now!

In the society at that time, for the princesses and other elite women, there was a system of self-chosen marriage (svayamvar). Though the system was popular, yet it was not always practiced by ordinary people, and there is no choice for a girl to select her life partner.

Suddenly she was back into the normal world with the chatter of the maidens while dipping the pots into the river for filling water. On their way back they came near her to share a word with her.

"Radha! Did you get the invitation from your Krishna for his marriage?"

"What, my Krishna is marrying? Whom? When? Who told you, girls ?"

"My husband reached home in the evening from Dwaraka, he told me, your Krishna abducted the princess of Vidarbha on her request! She loved him and wanted to marry him, sent a request to him to take her away from her kingdom to marry her.  Today evening the bride and groom reached Dwaraka. Tomorrow is the marriage!"-- A lady answered.

Silence started ruling the surroundings. One by one the maids slipped from there watching  Radha in her startled state!

A rumble of thunder in the sky... lightning flashed in the eyes of maidens and the darkness spread its wings there. The maidens informed her that Yashoda is distributing sweetmeats to the passers-by to celebrate the good news.

That gnawing pain in her heart made her restless and unknowingly she started walking towards Nand's house!

A maid with a message walked towards her, Radha looked at her questioningly.

What for? Is there any news ?'

"Erm ... someone came from Dwaraka, from our Krishna's palace with good news and sweets, -- before leaving they want to meet you once Radha !--- 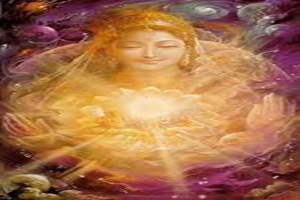 5 years ago Radha and Krishna relationship is the most beautiful in the world literature. This relationship is so pure, timeless and with unconditional love. That love is pervading us and she is the driving force of this world , such a world as he is in the present moment .Thank you ,thank you Madhu for reminding us to this immense bliss .Madhu

+ 6
5 years ago Thank you Ahila for liking my Radha-Krishna, the eternal lovers' story. The essence of every art form depends on it's intensity, it's capability of making all disagreeables evaporate from the being in close relationship with the ideas and feelings of a writer while expressing and the reader while reading it . Thanks once again for liking Ahila .

+ 6
5 years ago Thank you Vibha for liking my RK SS Waiting anxiously for your review . Because finally after all these years of association with you, I am deeply curious to know what you think of this! I know your rapturous love for lyrical words and while expressing your feelings the elegance in your comment that makes every single sentence a pleasure to read! Getting praise from such an august person, a literary critic is really an honor to me and to my simple writing. Thanks once again Vibha for these abundant praising words .

+ 6
5 years ago Thank you Avyakta for liking my RK SS . Showered many praises over my storytelling style ?Getting critical appreciation from you is not a simple thing my dear scholar! Thankful to you for these wonderful words.

+ 6
5 years ago Being an extraordinary writer yourself praising my such an amateurish attempt to define the eternal love of the Divine couple means you are so generous towards my write-up. So happy, you liked it, every writer looks forward to a small encouragement from the readers, I am blessed to have you as one of my readers. Thanks once again .

+ 6
5 years ago Thank you Nado for liking my RK SS . I always admire your spirit of friendship , expressing my special thanks because , from that far off land , you came here to understand the Epic stories with a special love towards Indian culture ,which I appreciate most in you . Thanks once again my dear friend .

+ 6
5 years ago Thank you Ahila for this beautiful siggy, it added a special visual effect to my write-up !Most importantly, I was so touched for your friendly acknowledgement for my write-up on Radha -Krishna story! I know you are a devotee of Krishna ! Thanks once again .