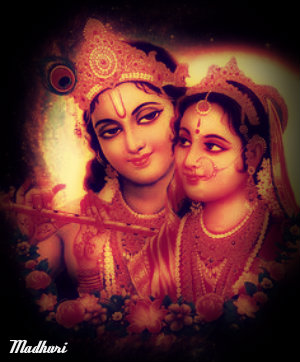 Since two days Nand Gaon was sailing through an emotional upheaval, was expecting a message from Mathura about the wellbeing of their  Krishna there.  Radha was not able to come out of that stupefaction, the separation from her Krishna. She was not leaving the house since then, was staring at the emptiness, lying like a torn garland on the bed, and was involved in soliloquies since then.  Radha, who was the embodiment of Universal love is at present lost interest in her life!

On the third day evening,  like a demented lady who lost her way,  Radha wandering on the banks of  Yamuna was searching for her Krishna in every floral bush, behind every creeper and corner.  She started looking at the vacant path, hoping that her Krishna will be back that day after winning over Mathura King Kansa.  There was no trace of a chariot coming, but she could only see the cowherd boys returning from the far off fields with cows in tow after their grazing. There was an inexplicable pain in her heart. She sat down under the peepal tree and slipped into her dreams and was immersed in deep contemplation! ---

On that day when she was making her hair, suddenly Krishna appeared in front of her and plaited her hair and coiled it at the back of her head in a careful manner and then caressed the few strands of hair dangling over her face with his fingertips. He then decorated her hair with colorful flowers collected from the bushes.   With quivers of love, she gazed into the mirror and was surprised as she saw Krishna's face in it instead of hers and she was overwhelmed by that magical display and laughed loudly!

"  See Krishna, you occupied not only your Radha's heart but covered her face with your lovely glances... look into this mirror, you can understand your Radha's conundrum !" -- He adorned some more flowers around her face and asked her to stare into the mirror again! There, the flowers appeared to be arranged around his neck and Radha appeared to have put her face betwixt his chin and his shoulder with closed eyes in a  complete trance! She chuckled at his playful magic! - He wanted to remind Radha of their eternal state and the oneness of their souls!  Colors of emotions flew from their eyes in harmony!

A sudden noise brought her back into the world ...  that of the words of the village maids, her bosom friends.

'Radha ..Radha, do you know Krishna and Balram killed  Kansa  the  cruel King and his associates  in a ferocious manner!'

Radha came back into the present from her past  bliss, heard the words of her  friends, and then with a  gratified smile  she said --

"My Krishna is there specifically for that purpose,  he never tolerates misrule and injustice, born to punish the demons in this universe "--she looked with awe while listening to the stories of the valiant deeds of her Krishna!

" Radha, he freed his parents and grandparents from the prison! He announced his grandfather  Ugrasen as the king of  Mathura! Now he is the Prince and the savior of the Yadava kingdom. There, people are thronging to have a glimpse of this divine boy! - said Madhavi with exhilaration!

'I know, my Krishna is prudent while making judicious decisions!  Being the  Supreme and Sovereign Being himself, he blesses the rightful with kingly justice.' said Radha.

Vasanthika came running towards Radha and started narrating to her---

Radha, listen to this, --- 'Krishna on his first odyssey to Mathura was amazed at its grandeur. He was surprised to find every corner of the town adorned with colorful garlands!  On that morning while taking a walk in the capital street, our Krishna met Trivakra  Kubja, a woman with a hunch back there.  Though she was the servant-maid of King Kansa, she heard the stories of Krishna and his valor through messengers and started adoring him. Krishna realized her devotion towards him and asked her to apply sandalwood paste on his body and in return he hugged her and changed her into a beautiful maiden. Onlookers were stunned at that miracle!  In her exhilaration,  she invited him to her house. He promised her that he will meet her again after his mission is accomplished !'

'My  Krishna never fails while recognizing the tender feelings of a woman, he knows how to bring out the inner beauty of a woman with his love, which always gives a divine glow to anyone whom he touches with love, his touch always increases the beauty of any maiden'-- with half-closed eyes whispered  Radha.

' Everyone is so eager to have a look at him at least once. Enchanted by his divine glow, mesmerizing personality, and supreme love, the young and the old at Mathura were drawn towards him alike while he was taking a stroll on the streets of Madhura!   Radha, do you know Mata  Devaki, Krishna's mother when she hugged him for the first time, she was overwhelmed with emotions and was reluctant to release him from her arms, afraid that someone will take him away from her again.  She is constantly with him and is taking every care of him'  said a cowherd woman.

A mother's love is like an ocean, always eager to occupy the far reaches of the shores of affection, that encompasses her child and wards off any evil eyes! Krishna is the tiniest kid to his mothers and the most romantic youth to his lovely maidens!  Mischievous  and mysterious  Krishna accommodated himself as  a spec  in his mother's womb, who holding the entire universe as a tiny part in his stomach !'  Radha laughed hysterically while tears of elation were flowing from her eyes.

'Now he is wearing shiny silken clothes and wearing many ornaments as a prince and moving in a chariot fit for the Prince. But he did not forget to wear the peacock feather on his crown and carrying the flute with him all the time !' one cowherd boy revealed to her.

'The rainbow supplies clothes of silk to him every morning,  The passing breeze sprays fresh fragrance brought from the spring garden over him ... His heart is so big to hug the entire universe, how can he forget to keep his Radha's mementos of memories with him ?' said Radha with a frisson in her heart. ' He is not only the savior of mankind but knows how to adjust himself to the earthly norms'... Radha murmured as if she was revealing to herself a great secret !!

That day her friends saw a glow of pride of a mother on her face when she heard about the admiration of the people of Mathura for her Krishna,  they witnessed a  lover's overjoyed expression in her eyes while listening to the valorous stories about the demolition of demons there and then they also saw an expression of awe while listening to the Kubja incident, an admiration, and appreciation of a devout devotee.

But the wait and the yearning to meet her Krishna was unbearable for Radha.  She lost interest in all earthly chores. She was always sitting in one place, lost in deep thoughts. Her family started worrying about her. Even her mother- in- law started singing Krishna's songs, praising him as the savior of humanity in an attempt to bring back Radha into the normal world.

Sometimes Radha aimlessly goes to Nand's house, asks  Yashoda about Krishna, and both hug each other with flowing tears. For hours they both talk about Krishna and his playful ways of teasing the Gopikas, his valorous deeds, and his various mischievous pranks to trouble the Gopikas in that village. Radha started living with memories as her companions. She laughs at an illusory image of her Krishna and suddenly starts talking to herself,

' Why you were born Radha? If your  Krishna is not there why you are still alive, go to your  Krishna and live with him, he is your own ... who has the audacity to question  Krishna's most lovable person like you? Oh, how insane you are, he is not yours, he is a prince now, because of your good Karma in your previous birth, you got a chance to be with him for a while. Now you  left  here with his image to live with.'

Someone came to her house to inform her that Prince Krishna is going to the Ashram of sage Sandeepani for learning, for education in his Gurukul!

Radha laughed like a flower shower, thinking how lucky the knowledge is, to be absorbed, to be possessed, and to be dispensed by the Almighty himself, thereby always adorning Him! 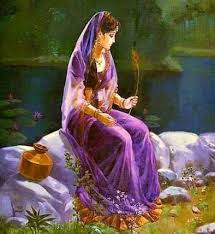 + 4
1 years ago Oh the way Radha knows her Krishna and how she completes him 😍 Beautiful work, di!

5 years ago This Edit is really looks great .

5 years ago What an absorbing SS it is ! Really I liked the way you are writing this Radha Krishna love story Viswasruthi ! Waiting for the next chapter .

5 years ago I loved the story.

+ 5
5 years ago Krishna , thanks a lot for expressing your astounding views in your review which embellished my writing , otherwise are simple expressions . I am trying to understand through this writing the enduring enigma of Radha- Krishna love and their longings for each other , an occasional thought comes riding on honest emotion and little else to my mind which is the result of this Epical Night . Thanks once again Krishna .

+ 2
5 years ago UnresYour updates always astound me Madhuri, and leave me at the peak of devotion You have out done yourself with this one. The Krishna sense encompasses Radharani alone, and that is what we have to learn from her.How to be like her to attain Him. She gives Him Herself, so completely, that He gives Her Himself, just as completely. The variety of love that Radha has to offer is something that we never see.The pain of joy and the joy in pain was so perfect in this update This line stole it for me Radha laughed like a flower shower, thinking how lucky the knowledge is, to be absorbed, to be possessed and to be dispensed by the Almighty himself, thereby always adorning Him!

A rewriting of one side character of BALH2 might as well change the story for ...

Forever yours - A journey from two broken hearts to a complete soul. By midnight_library 308 2 1
TOP