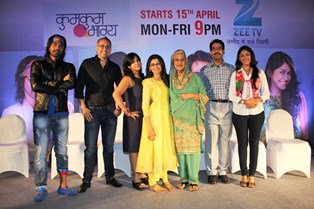 Narrating tales that have captivated audience attention for almost two decades now, the master storyteller Ekta Kapoor is back with a new offering on Zee TV. Her new show Kumkum Bhagya' launches on 15th April at 9 PM, this time replacing her own immensely successful show Pavitra Rishta' on the channel. Based loosely on Jane Austen's classic 'Sense and Sensibility', Kumkum Bhagya' is its Indian interpretation, following the life of a Punjabi matriarch Sarla Arora who runs a marriage hall and lives with the hope of seeing her two daughters Pragya and Bulbul who're poles apart, happily married some day! Known for making shows that are women-centric, the pivotal characters of this new show are a bunch of strong, feisty women, living together in an all-female, matriarchal family.

Sriti Jha plays the character of Pragya, the elder sister, who is practical, hardworking and committed to supporting her family ... though she's barely finished her own studies, she teaches at a college to ensure that her mother Sarla's (Supriya Raina Shukla) meager earnings from the Kumkum Bhagya' marriage hall never fall short in making the two ends meet. In the midst of all this pressure on her, she's forgotten how to unwind or pursue any passions of her own. Mrunal Thakur plays Bulbul, the younger sister who has her head in the clouds. She's vivacious, smart, stylish and a complete dreamer. It barely occurs to her to snap out her own make-believe, rose-tinted world and be of any real use to her family. She idolizes the ruling heartthrob of the country, Rockstar Abhi. Actor-turned-producer Shabir Ahluwalia, who has shied away from facing the camera since 2012, has been roped in to play Rockstar Abhi with a cult following of his own. Faisal Rashid will be seen as Suresh, the college professor who works closely with Pragya (Sriti Jha). Having led a tough life in the military and lost most of his close ones, he is an embittered soul with much angst and pent-up frustration about life. It remains to be seen how the lives of these two men intertwine with the Arora girls and change their destinies forever!

Talking about introducing a fresh concept on primetime, Zee TV Programming Head - Namit Sharma said, "It takes one epic show to replace another, so you can imagine the faith we have in Kumkum Bhagya, as a property, to replace a show that has been extremely special to Zee for over 4 glorious years. Pavitra Rishta has given Indian television audiences their most sought-after dinner table companions in Manav and Archana - star-crossed lovers that millions of viewers have loved, and idolized. Kumkum Bhagya is another extremely engrossing story from a Punjabi mohalla in Mumbai. It talks of a matriarch and her quest to find ideal grooms for her daughters who're as different as chalk and cheese. Deriving its core from Sense and Sensibility, 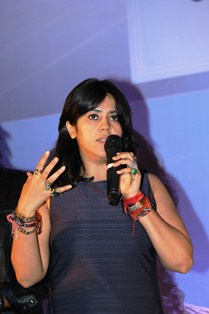 Ekta has Indianized it beautifully. It's a passionate drama of love, a far cry from regular saas-bahu soaps and has an ensemble cast of some very talented actors."

With Kumkum Bhagya' slated to air at 9 PM from the date of its launch on Zee TV, Pavitra Rishta' will now be aired Monday - Friday at 6:30 PM on the channel. Talking about the time shuffle amongst her projects on Zee TV, Ekta says, "While two of my shows (Pavitra Rishta and Jodha Akbar) are already on-air and doing immensely well on Zee TV, it's a pleasure to extend my partnership with Zee to a third show. Pavitra Rishta' has had a run of over 4 years now and the journey has been most gratifying for me as a producer. While the audiences who are hooked on to 'Pavitra Rishta' will continue to enjoy the show at 6:30 PM, Kumkum Bhagya' will open at 9 PM, drawing maximum eyeballs. Kumkum Bhagya is so contemporary in its treatment that viewers will be able to instantly spot characters out of their own lives in the show. It's a story of passionate love that anyone with a soul would be able to easily relate to."

Speaking of his comeback as an actor, Shabir says, "With me producing shows, it was getting very difficult to manage time for acting assignments. But now, I have decided to concentrate on acting. You can't be away from what you love doing for long. The role appealed to me a great deal. This is the first time that I will be playing a rockstar on television and in order to look my part, I had to ensure that I did not just get my costume and look right, but also get that attitude right that is required to portray a rockstar onscreen."

Ekta Kapoor's association with Zee TV dates back to almost two decades ago when the partnership produced one of the greatest successes of satellite television - Hum Paanch. Her soaps, be it Kasamh Se, Pavitra Rishta or Jodha Akbar - the latest historical to rule the roost on Indian television, have been universally appreciated and have enjoyed long, glorious runs on the tube.

latanzia 6 years ago This book deals with some tricky issue i want to see how she will handle this particular novel, i will be watching this just to see how ekta turn this into an indian serial.
Jodha Akbar Rocks
Rajat Tokas rocks as Akbar and Paridhi Sharma this is the best Jodha ever.

RagSia 6 years ago Sriti ka show hai..
Gotta watch it!
Was wondering if Ankita continues in PR!
Btw will it air late night?
I mean m sure Kumkum bjagya will get one of 11 or 11.30. I hope Jodha Akbar continues to be at 11.
I love it.
N wanna continue watching it twice a day, especially during confession n post that! (blushes)

Dhruti_rocks434 6 years ago Sriti Jha rocks you are looking awesome in promos all the best.

abhiyaneet8 6 years ago It is good to see shabir back...