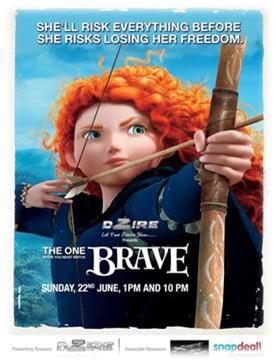 This month Zee Studio sets the screen on fire with heart thumping, fire igniting emotion as Brave; The American animated fantasy comes to life. Released in 2012 the make-believe world of Brave is set in Scottish Highlands, painting the adventures of Princess Merida (protagonist).

Living the life of a rebel, her most prized possessions are a bow, arrow and most importantly freedom. But defiance leads her to downfall when the princess accidentally transforms her mother into a bear. Merida soon realizes the graveness of the situation and ventures off to undo her mom's spell.

Zee Studio takes its animation movie buffs on a thrilling voyage as witches and demons come alive on Indian Television! Brave has won titles such as the Academy Award for Best Animated Film, Golden Globe Award for Best Animated Feature Film and BAFTA - and is surely on a mission to thrill yet again. The channel believes in showcasing the best films and with this month's Movie of the Month: Brave, the upcoming weekend already seems to be a much awaited one!

Journey into the adventurous life of Princess Merida as Brave:  THE ONE movie you must watch takes center stage!

If Masaan was popular, audience would have loved ‘Shalu Gupta’: Shweta ...